Bays of East Attica Regional Survey. S. Murray (University of Toronto / CIG) and C. Pratt (University of Western Ontario / CIG) report on the first field season of the Bays of East Attica Regional Survey (BEARS) Project, May 27 to June 28, 2019. The purpose of the BEARS project is to conduct intensive and extensive survey in an historically important area of Attica where development is threatening cultural heritage of archaeological significance. The project aims to make substantial contributions to scholarly understanding of Athens and Attica by improving documentation of human activity of the region around the bay of Porto Raphti from prehistory to the present. In particular, BEARS investigates evidence for the role of the bay in the economy of EBA Attica, the nature and location of late Mycenaean occupation in the bay, and the spatial organization of Classical and Hellenistic demes of Steiria and Prasiai.

The BEARS team divided its time among a number of different intensive and extensive survey methods and documentation techniques. These strategies included conducting gridded collection on known sites, walking intensive survey units, conducting extensive survey in the landscape, mapping features with dGPS, and collecting drone-based aerial footage of sites and landscapes in the bay. The majority of the time in the field was spent conducting gridded collection in three locations: on the Raphtis island, the eastern end of the Pounta peninsula, and the valley and acropolis of the Koroni peninsula.

In terms of collection strategy, the team aimed to maximize production of useful knowledge while minimizing the number of actual artifacts collected. On the Pounta peninsula (c001) all lithics and pottery were collected. During the gridded collections on Raphtis (a001) and at Koroni (d001, d002), a representative sample of diagnostic pottery and all lithics were collected. Throughout the project, tiles were counted and weighed systematically, but left in piles within units in the field for later study, rather than collected. Most other finds that we encountered in the field were collected, including objects made of metal, glass, stone, and terracotta. Ground stone artifacts were abundant on Raphtis island, but due to the difficulty of transporting these large, heavy objects from the island, these were flagged and photographed and but left in the field, with the exception of some small hammer stones. Tile piles were ultimately read in the field in consultation with a tile specialist, who pulled a very limited number of informative pieces for collection and produced counts of Corinthian and Laconian cover and pan tiles for each unit.

In addition to gridded collection, the team walked 24 intensive SUs on the slopes of the Koroni peninsula (for details, see results section below). Surveyors in intensive fieldwork teams were spaced at 10 meters and asked to scan a 2-m wide tract within clearly mapped survey units.  Walkers counted all observed artifacts in their survey tract, as well as making note of any visible architectural or structural features of interest which were entered into the database and flagged for subsequent mapping and documentation by a separate team equipped with a dGPS. A representative sample of diagnostic ceramics and all lithics were collected.

Several days of extensive survey geared towards reconnaissance and identification of architectural features in the landscape and unknown artifact concentrations in the mountainous and forested plots of land in the region of the bay were conducted in 2019. Extensive survey on BEARS was done unsystematically and designed primarily as a targeted approach of reconnaissance, to be followed by detailed study of promising sites in future seasons. Extensive work was conducted by small teams of two or three experienced field surveyors with a strong sense of the likely locations for archaeological sites in the landscape. The extensive survey teams were equipped with satellite imagery used to guide investigation, and carried handheld GPS units with which to acquire geodata on observed features, so that they could be mapped roughly in the project GIS and revisited by the feature documentation team as appropriate. When their investigations laid within the official survey area for 2019, extensive survey teams also collected artifacts associated with features, or artifact scatters that were themselves documented as features, at the discretion of the team leader. Other extensive survey expeditions were conducted purely for the sake of understanding the landscape and assessing likely requirements of resource input for future fieldwork.

The quantity and nature of the lithic material from the Pounta peninsula suggests that the bay of Porto Raphti may have served as an important point of contact between the Cyclades, especially the island of Melos, and Attica during the FN and EBA, when the two regions shared important cultural and economic connections. The preliminary analysis of the lithic assemblage also provides clues regarding the use and procurement of the sites’ lithics. The large number of obsidian pieces, which constitute the vast majority of the assemblage, indicates that lithic production was almost exclusively carried out with obsidian. Microscopical characteristics suggest that the obsidian is of Melian origin. Judging by the large quantities of debitage, we can conclude that reduction did occur extensively in the area of the Pounta peninsula. All phases of the reduction sequence were identified and the region appears to have played a central role in obsidian artifact production and obsidian exchange. The substantial quantities of debitage with large cortical flakes, combined with the small number of exhausted blade cores and the considerable number of pressure by-products, such as blades, suggests that Pounta was possibly a location where obsidian nodules were transferred from the island of Melos. After that, the first stages of reduction took place on the peninsula and the final products (e.g., prepared or semi-prepared cores) were possibly transferred inland to other sites to undergo further reduction, use, reuse, and re-distribution to neighboring sites.

On Raphtis there is certainly plenty of evidence for a wide variety of activities, domestic, ritual, and industrial, all of which points to the presence of a settlement of some kind in the LH IIIC period. A few important preliminary conclusions about the ceramic assemblage may be observed. First, in terms of chronology, it seems that the most of the material can be dated between LH IIIC Early and LH IIIC Late, with the majority of the finds from the surface dating to the LH IIIC Middle and Late periods, i.e. contemporary with phases II and III at the cemetery of Perati. Comparatively lower quantities of LH IIIC Early pottery may be a result of simple post-depositional processes, as levels of such date are most likely stratified below LH IIIC Middle-Late deposits. Noteworthy are a few possible palatial period fragments (linear kylix foot P00026, patterned mug P00064), which may attest to an activity at the site that would pre-date the foundation of the Perati cemetery. Second, in terms of fabric, there is a strong presence of a ceramic class described as White Ware, known from neighboring contemporary sites such as Lefkandi, where it represent a dominant group in LH IIIC Late, but also very prominent at Perati cemetery.  It is interesting to note the presence of at least two slightly vitrified pieces of White Ware, which could possibly suggest that this material was being produced in the vicinity, as such pieces are not known from any other find spots of White Ware, including Lefkandi.  A peculiarity of the White Ware assemblage on the island that contrasts with the assemblage from the Perati cemetery is the widespread use of perforation where handles join the bodies of vessels, noted only rarely in similar pottery types found in the cemetery.  A common feature of both ceramic assemblages is the widespread use of kalathoi, including White Ware examples. The miniature kalathos P00015 is so far unique.

Third, perhaps the most unusual aspect of the ceramic repertoire recovered on the island is the extraordinary range of shapes of cooking pots represented.  This has to be appreciated with respect to the LH IIIC Middle-Late chronology of the majority of datable finewares. During that stage, cooking pottery on the Greek mainland is extremely dull, consisting solely of one- and two-handled flat-based pots of similar morphology. The Raphtis assemblage has much more in common with palatial-period cooking pottery, with a variety of forms and wide use of tripod cooking pots and griddles. Most tripod legs have impressed oval, often with an additional perforation, near the joint. The number of griddle fragments recovered so far is matched only in assemblages deriving from palatial centers such as Tiryns. It is also worth noting that at least three different fabrics are present in griddles recovered from Raphtis in 2019. Finally, coarse storage/utilitarian pottery cover the complete range known from twelfth century BC settlements, including pithoi, vats, as well as bathtubs.

As a result of work undertaken in 2019, the archaeological remains on Koroni, previously thought to have been an exclusively third-century camp, must now be re-evaluated as a complex multi-period site with pottery and roof tiles demonstrating not only Late Archaic, Classical, and early Hellenistic activity, but some Late Bronze Age occupation as well. The presence of LH IIIC pottery, including cooking shapes, indicates that there may have been a small settlement on the Koroni acropolis or its slopes contemporary with the substantial scatter on Raphtis island. In terms of Archaic and Classical material from Koroni, it seems likely that activity related to the deme of Prasiai must have predated Hellenistic occupation at least on the acropolis. Corinthian tiles with the kind of distinctively high quality manufacture and polish as some of those observed on the Koroni acropolis are encountered in the Archaic and early Classical periods, and even without recovering any decorated elements it seems unlikely that these plain tiles would post-date the fifth century BC.  Tiles of this scale are also unlikely to have been destined for domestic architecture but rather are suitable for a temple or other sacred or public building.  While the relatively wide distribution of the Corinthian tiles on the acropolis, with small numbers of fragments occurring throughout the gridded collections, suggests that they had been scattered and perhaps reused by the Hellenistic occupants of the citadel, it seems unlikely that they would have been brought far.  The most logical conclusion based on present evidence is that these tiles originated from at least one early building on the acropolis, perhaps part of a sanctuary. 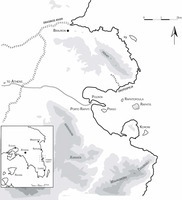 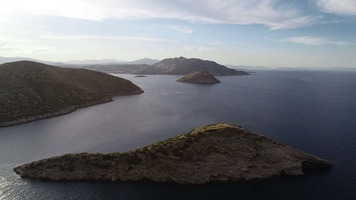 Fig. 2/ View of the mouth of the bay from the northwest (photo credit: D. Nakassis) 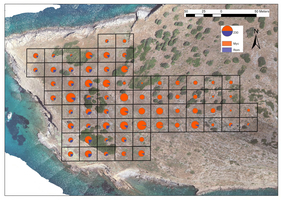 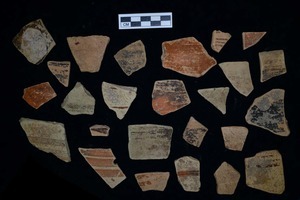 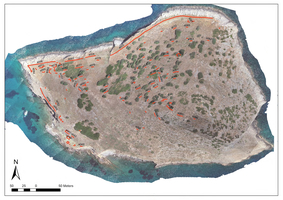