‘Villa of the Dolia’, Ancient Epidauros. B. Davidde Petriaggi (Istituto Centrale per la Conservazione e il Restauro), P. Galiatsatou (Ephorate of Underwater Antiquities) and S. Medaglia (Istituto Centrale per la Conservazione e il Restauro) report on a campaign of excavation and conservation undertaken at the ‘Villa of the Dolia’ in July 2018. This complex of Roman age extends for about 1600 square meters below sea level and it is characterized by the presence of several rooms mostly connected with the processing of the agriculture products, including a warehouse with twenty dolia still preserved in situ.

The objectives of the 2018 campaigns were to:

1) document the site through photographic and video documentation, photogrammetric 3D recording, drone survey and differential GPS RTK documentation;
2) study the archaeological remains, with particular attention to the building techniques;
3) carry out underwater excavation in three areas (the room No. 28 paved with a bessales floor; the recent fill levels of the well No. 23 that will be continue in the 2019 campaign, and a trench in the rooms Nos. 21-18, in the SE of the complex;

4) to study and to document the state of conservation of the site;
5) study the biological degradation of the structures to characterize the bioerosion phenomena;

6) restore the room of the dolia;
7) protect selected area with geotextile at the end of the campaign.

During the first investigation campaign in 2018, a preliminary interpretation of the wall structures was started. The typological classification of construction techniques and building materials used was performed with the aim to reconstruct, where possible and in a diachronic key, the architectural history of the whole complex.

The current state of the villa shows a very articulated architectural configuration belonging to a series of construction phases that have changed its aspect after extensions, additions and renovations. The analysis of the construction techniques is made problematic by the state of preservation of the masonry, which often showed limited heights to a few tens of centimeters. Sometimes, in cases where the walls are better preserved, most of them refer not to the upper part of the grading plan but to the foundations that the hydrodynamism and wave movements exposed by digging deep into the seabed.

The villa shows a remarkable variety of construction techniques that cannot always be grouped and associated to standardized models and techniques. The construction of the walls is evidently linked to utilitarian aims with the use of the material available in the surroundings. This multiformity, emphasized by the frequent use of heterogeneous materials, often reused, is certainly connected to the simplicity of the complex whose main function was typically agricultural and productive.

A large part of the walls – perhaps those pertaining to the oldest phase of the villa – are made of opus mixtum in which the rough stone is used together with the brick. In this case, these masonries provide for the alternation of bands of opus incertum consisting of small-medium-sized pebbles bonded with mortar and bands composed of two double brickworks interposed with small niches of isosceles trapezoid shape (Fig. 1 A). The niches are made by juxtaposing specially fragmented bricks; a pebble is placed inside the niche and in the space standing between one and the other. At the base, in correspondence of the grading plan, these walls often show a masonry base composed of a row of large-sized lithic blocks roughly rough- ened. This building techni􏰁ue is found, for example, in the dense array of rooms that follow one another on the western side of the cella vinaria (Fig. 2), on the northern face of the wall bordering the villa and in some areas of the southern archeological complex (Fig. 2). The presence of large blocks rows related to walls of poorly preserved rooms suggest that many other areas of the villa may have been built using this mixed-technique.

A variant of the latter was found in the room No. 3 in which bands composed of single lines of bricks interposed to panels in opus incertum and similar niches to the previous ones are visible (Fig. 1 B).

A second technique in opus mixtum was isolated in the NE sector of the complex and involves the walls of rooms 18, 19, 20 and 21 (Fig. 2). These are poorly preserved cement walls in which rows of a line of bricks and just rough-hewn blocks of stone are alternated.

The divider between rooms 11 and 12 is also constructed in opus mixtum, where a register in opus tes- taceum composed of three rows of rectangular bricks (41/42×30×2 cm ca.) is alternated with panels made of opus incertum.

The opus incertum characterizes also some rooms placed on the NE side of the dolia warehouse in which the use of different medium-small lithic elements immersed in abundant mortar is recorded; in these walls frequent fills of brick fragments are observed (Fig. 11, H). In the room No. 6 the opus incertum is different and characterized by walls built with unfaced concrete and irregular quarry limestones aligned in pseudo-horizontal rows (Fig. 1 G). Smaller stones are present, and, sometimes pottery fragments. In some cases, big squared stones enforce the angle.

The back wall of the complex deserves a separate discussion as it is observed in the section that involves rooms Nos. 18, 19, 20 and 31 (Fig. 2). It is a mighty wall built with blocks of medium-large dimensions bonded with mortar and in which finished and well squared blocks sometimes are used, probably taken from the ruins of older monumental buildings.

The other techniques present in the complex include the use of bricks bonded to concrete cores (opus testaceum). The first, with a very accurate execution, has uniform and perfectly horizontal laying surfaces in which the mortar beds have the same height as the bricks. In these walls bricks of different sizes were used. In the pool/basin 22 (Fig. 2), for example, there are bricks measuring 29/30x41.5/42x4 cm (Fig. 1 D, Fig. 3), while in the back wall of room 33 there are rectangular bricks of 16.5x29x3 cm. In the walls of this last section, bricks cut into rectangles are also inserted (Fig. 1 C).

In opus testaceum, with a much less accurate texture than the previous one, are constructed the walls of the ruins placed closely outside the complex northwards, perhaps pertaining to basins (Fig. 4). In these constructions are used big curved tiles cut irregularly into pieces of different sizes. The laying surfaces are neither uniform nor perfectly horizontal 21.

Finally, the use of fragments of curved tiles, with a further deterioration in the texture and a chaotic thickening of the bricks, is recorded in the back wall of the room 33 and in the walls of room/basin No. 17 (Fig. 1 F).

Fig. 1/ Some of the masonry techniques observed in the archaeological complex 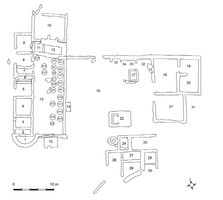 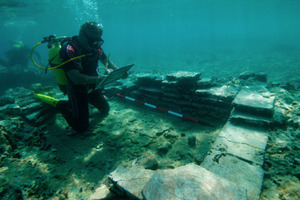 Fig. 3/ Pool/basin No. 22 with the diver focused on documentation activities 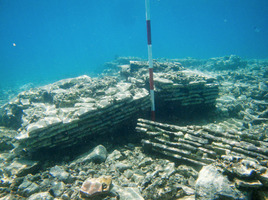