Kythera, Australian Paliochora Kythera Archaeological Survey. L. Tzortzopoulou-Gregory (AAIA) reports on the 2019 field season of the Australian Paliochora Kythera Archaeological Survey (APKAS). During June-July 2019 the APKAS team carried out a four-week study season, including a one-week agricultural terraces sampling study in order to determine the chronology of these intricate and highly sophisticated human constructed landforms characteristic of Kythera and especially of the area surrounding the village of Karavas in the northern part of the island.

The main objective of the geo-archaeological study was to determine the various construction techniques and chronology of the field terraces in the northern part of Kythera and to test a new methodology for the study of terraces that may be applicable to similar landscape formations in a broader eastern Mediterranean context. Fieldwork involved the collection of soil samples for micromorphological analyses as well as for Optically Stimulated Luminescence (OSL) dating from at least three different terrace systems, as well as the recording of certain characteristics of the retaining walls and their construction techniques.

The micromorphological samples were collected from three different locations in Karavas: two from the area of Kambi-Keramari (Fig. 1) and one from the Bronze Age site of Theodorakia (Fig. 2). All these areas were intensely investigated during the APKAS 2016-2018 seasons, revealing significant concentrations of ceramics and lithics from the Middle and Late Bronze Age.

The terraces that were selected for the 2019 study were identified on the basis of their collapsed retaining walls, in an effort to minimize any disturbance to the landscape and the existing traditional wall construction. Before the samples were collected the terrace profile was cleaned so that all the horizons were clearly visible. Once cleaned, a sampling tin was pushed into the profile gently; a trowel was used to remove excess soil around the tin as it is pushed into the fill that has accumulated behind the terrace wall. Special care was taken so that the profile was not disturbed prior to the tin being inserted into it. To ensure proper recording a stratigraphic section of the profile was drawn in which each discernible layer was annotated and described. The texture and colour of the soil was recorded with a Munsell Colour Chart.

With regard to the dating of the layers, the method chosen is that of Optical Driven Luminescence (OSL). The dating of the OSL samples will provide a secure dating for the different depositional events behind the terraces. Sampling for the OSLs was done carefully, in low light conditions, in order to avoid contamination from direct sunlight.

The sampling strategy consisted of horizontally pounding steel tubes/pipes (5 cm x 20 cm) into the target horizon once the chosen profile had been cleaned back so as to expose a fresh surface. Samples were then taken either from the middle of each discrete stratum or above and below any apparent change between soil layers. At each sampling site, the tube was inserted horizontally using a hammer and then removed from the ground and wrapped in foil and paper, and then placed in a black nylon bag. (Fig. 3). In addition to the amount of sample required to measure luminescence (~ 100g), a quantity of soil (~ 200g) was also collected from the corresponding sampling location and placed in a nylon, tightly sealed, transparent, nylon bag (to maintain its moisture, a parameter necessary for dating) and sent to the laboratory to measure luminescence activity.

A total of four samples for micromorphological analysis and six samples for OSL dating were collected. Samples were then sent to laboratories at the universities of Thessalonike and Ioannina respectively. Results are expected by the end of February 2020.

Preliminary observations from the stratigraphic recording of the terrace samples show that the retaining walls in our three sample locations were constructed using different techniques. A technique of vertical cutting of the rock was used at Theodorakia, while at Kambi 2 there is shallow digging of the natural background, and at Kambi 1 a deposition of soil/stone material in the foundations of the wall was used. It is also noteworthy that the construction of the terraces was not completed in a single episode of soil deposition but in multiple episodes over time (three in Kambi 1, five in Kambi 2, and four in Theodorakia). We hope that further investigations of the depositional sequences of terrace construction in the area will provide illuminating results and a better understanding of the nature and history of the agricultural field systems of northern Kythera which are such impressive testaments to human modification of the landscape over millennia.

Fig. 1/ The area of Kambi-Keramari showing the ceramic densities recorded during APKAS 2016 and their relationship to the terrace sampling areas (Kambi 1 and Kambi 2) 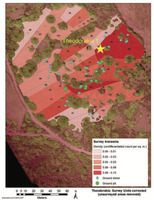 Fig. 2/ The area of Theodorakia showing the ceramic densities recorded during APKAS 2016 and their relationship to the terrace sampling area (Theodorakia 1) 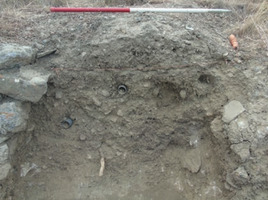 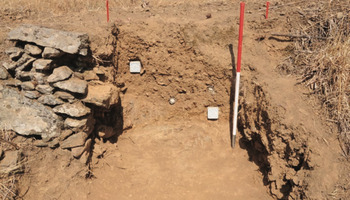