Hersonissos, plot in property of «AKTI HERSONISSOU Inc» Stella Mandalaki (ΚΓ’ ΕΠΚΑ) reports that the excavation brought to light a complex of rooms dating to the Early Roman period, a Roman paved street and a workshop area of the Early Christian period (Fig. 2). From the Early Roman complex four rooms were uncovered, with two of them being completely destroyed (Fig. 3,4,5). In Room 1, the west wall, which is coated with plaster, the east and the north are preserved. The north edge of the south wall was discovered underneath the north retaining wall of the adjoining paved street, evidence that substantiates the building of the Early Roman complex before the configuration of the street.  The walls of the Roman rooms are built with small stones, brick and a layer of compact and smooth lime mortar. The floors were consisted of large rectangular bricks. In the interior of Room 2, a built grave was constructed during the Early Christian period. The Early Roman complex, which is dated to the 1st c. AD, was significantly expanded and was covering the largest part of the plot, as it is suggested by the scattered bricks and the isolated architectural structures.

The paved street is built from large carved slabs with small stones placed in the intermediary gaps (Fig. 6,7). Its width is 3.50 m. wide and it is oriented from the W to the E, with an inclination towards the east. It is demarcated at the north and the east with two elongated walls, which have been consecutively repaired and altered. It is not impossible that at first the paved part of the street could have been used as an uncovered space at the interior of the Early Roman complex, which was later transformed into a road. In later building phases the paved street was covered by three successive layers of packed earth soil and shells, indicating the use of the road during the Byzantine period as well. North of the road and above the destroyed complex of the Early Roman times, isolated walls of a Late Roman building were also discovered.

An Early Christian workshop area was uncovered in relatively good condition on the eastern part of the road (Fig. 7,8), which was constructed above the destruction layer of the Early Roman complex of the 1st c. AD. Two more building phases were identified; the older dates to the 4th-5th c. BC. The workshop area is divided in two uneven parts. The floor is consisted from packed earth with traces of burning above the agglomerated building material of the destruction layer. In contact with the north wall, a stone basin in secondary use was located. An iron trowel (Fig. 9), metal slags and an obsidian fragment from Nisyros were found in association with the basin. Eastern of the basin, a perfunctory rectangular structure was unearthed, while lengthwise of the east wall of the room, rectangular parts of gray clay were detected. Moreover, two uneven cavities were identified on the earthen floor of the west part of the room, coated with small stones which were purposed for supporting vessels or workshop use.

The area south of the workshop is located on a higher level in comparison with it and the access is achieved with a ladder. In this particular area a small marble pillar, iron, bronze and lead fragments, as well as an intact jug of the Byzantine period were collected. It is possible that the space on the east of the room was an outdoor area. Interesting were the findings from the destruction layer of the Early Christian complex. Small stone pillars were gathered, one of them having a conical end (Fig. 10), part of a rim from a stone vial, ionic capital, a multitude of slags, iron nails, an iron trowel, similar to the one that was found in association with the stone basin, as well as a lamp of the Byzantine period and a stone with the symbol of the cross engraved inside a square.

Two superficial walls, which have been erected above the destruction layer of the older Early Christian complex, fall into the secondary building phase which is dated to the 6th-7th c. AD. It should be noted that during the latest building phase, the workshop character of the complex was maintained. 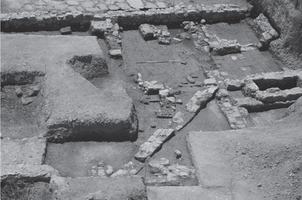 Fig. 2/ Plan and trenches of the excavation 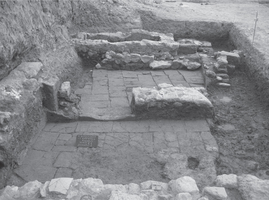 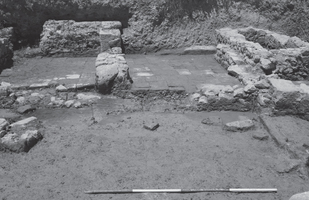 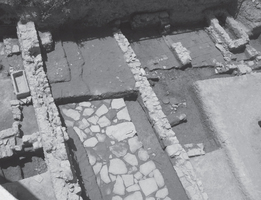 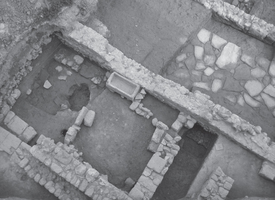 Fig. 6/ Paved street in association with the preserved rooms of the Early Roman complex 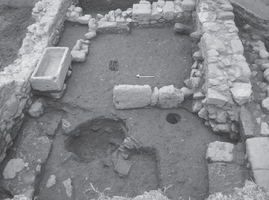 Fig. 7/ Paved street in association with the Early Christian workshop