Pallene, Gerakas, DEDDHE construction works. Anna Plassara (B’ ΕΠΚΑ) reports on excavations in Kantza and Gerakas in the broader area of KYT (Fig. 1). Five destruction layers were found, two of which date to the Early Bronze Age, one to the Archaic period and one to Roman times. The fifth, undated, one contained a lekythos (Fig. 2) and was located on top of an ancient road (Fig. 3). Additional finds from the destruction layers include pottery sherds, fragments from roof tiles and a loom weight.

A Geometric in-urned cremation was excavated containing the remains of an infant. A pit grave (Figs 4,5) containing 3 intact vessels (a trefoil-lipped oenochoe and 2 small kyathoi) but no human remains were found next to the in-urned cremation. More burials were discovered in the area of the aforementioned ones, specifically 3 pyres and 1 pit grave. These contained pottery sherds and bones.

Finally, two structures were revealed. The first consists of two rooms; one rectangular and one oval-shaped (Fig. 6). This structure contained pottery sherds, shells, obsidian tools, stone tools, a hand-axe and a terracotta spindle-whorl, and its floor was made with carefully placed rubble (Fig. 7). The second structure (Fig. 8), which dates to the Bronze Age, contained obsidian flakes and animal bones.

Additional finds from the excavation include prehistoric sherds, Roman sherds, obsidian tools and flakes, stone tools, a hand-axe, a spindle whorl, animal remains (Fig. 9), and a prehistoric pithos with a cook pot used as its lid (Fig. 10).

The excavation was conducted by A.M. Romanidou. 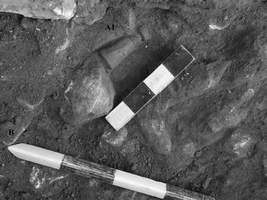 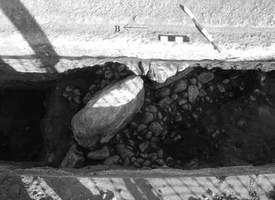 Fig. 3/ Pallene, Gerakas, DEDDHE construction works, the road and one of its retaining walls 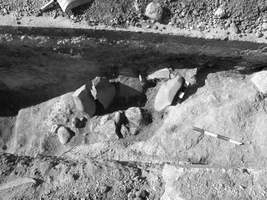 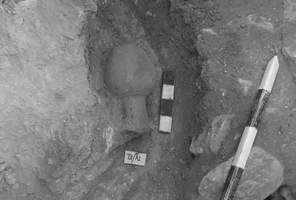 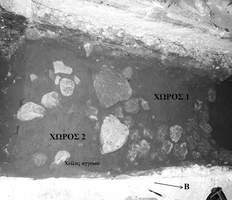 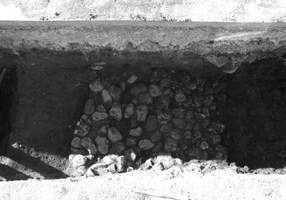 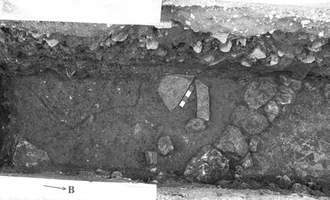 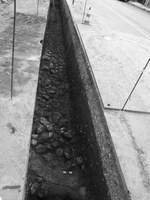 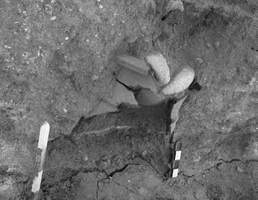