This is an interdisciplinary project which aims at systematizing piecemeal information and increasing the archaeological record about the Aphidnian landscape. This area encompasses and surrounds the citadel of Kotroni, near Kapandriti and Lake Marathon, and a further aim of the project is to place the known citadel in its broader environmental, topographic and regional context. The project uses non-destructive methods: intensive survey, remote sensing, airborne LIDAR, geophysics, and geological/geomorphological analysis.

In 2019 the remote sensing, LIDAR and geological aspects of the project were completed. The 2019 intensive survey helped to identify several new archaeological sites in the immediate vicinity of the citadel, and to pinpoint the location of the Middle Bronze Age tumulus excavated in 1894. The survey also brought to light indications of local, hitherto unknown, ceramic production and metallurgical activity.

In 2019 satellite and aerial images of the area were collected and processed from a number of geodatabases. Archive multi-series Landsat images were used to investigate any changes in the landscape beyond 2012. The archival aerial images of 1962 and 1970 were examined, and these historical images demonstrated dramatic change in landscape cover since that period. Vegetation properties were extracted using the very high-resolution Worldview-2 imagery (0.46 m). These data, especially when forming linear features, also helped to target areas for investigation where natural outcrops, terraces or possible archaeological structures lie concealed by vegetation. The last step of image analysis was the characterization of vegetation and soil proxies, used for the detection of buried archaeological remains. To mitigate i) the ‘noise’ created by the dense vegetation on the citadel slopes (where, potentially, habitation is expected) and ii) the difficulty in exploring these areas through field walking, airborne LIDAR data were acquired with an approximate density of 35 points per m2. The majority of the features mapped were linear remains, including a large number of terrace fragments especially in the region of the citadel; there were also remains on other hilltops in the area.

Geological reconnaissance that took place within the first week of field work (prior to the intensive survey) was restricted to a 1.5-2 km radius around Kotroni. The primary objectives were (1) to investigate geological processes affecting the archaeological record; (2) to confirm the bedrock geology in the vicinity of the citadel; and (3) to retrieve soil samples for Optically Stimulated Luminescence (OSL) profiling and dating (OSL-PD) from agricultural terraces and earthworks on the citadel slopes and the immediate vicinity, identifying levels of erosion.

Nine earthworks were examined for OSL study using portable OSL equipment, on the south slope of the citadel and the area immediately to the southeast of the citadel. Overall, OSL profiling has shown considerable promise in the field. The sediments are characterised by moderate OSL signals and show remarkable internal stratigraphic consistency and coherence. These data were used to generate a relative chronology for the sequence of construction for the agricultural terraces and earthworks at Kotroni.

Observation and artefact collection are the main strategies of the pedestrian survey, aiming to establish artefact densities, spatial distributions and clustering by era. Architectural remains were recorded either as line features (which could be terrace walls, and other wall traces), or as points (represented by columns, cut blocks etc found in the fields, or membra incorporated in later structures). Along with features extracted from the LIDAR data and the sketches and annotations made of standing structures from the archival 19th c. work by Karten von Attika, the distribution of these features will help to identify the general areas where ancient structures might reasonably be expected.

In terms of the finds, the pedestrian survey recovered 14,841 sherds, of which 15.1% were form- diagnostic and 3.7% were decorated. There were also 34 fragments of very large vessels (mostly pithos rims). Thousands of roof tiles, both of the Laconian and Corinthian types were also recorded. Among the ceramic finds there were several examples of misfired vessel fragments and misfired tiles, alluding to local ceramic production (the area south and southwest of the lake is well-known as a source of clay at least from early modern times. The area was known as ‘Keramidi’ (literally Tile) in the 19th century). The small finds include stone tools or by-products thereof, including black obsidian flakes, rounded pounders, and regularly shaped ground tools. The terracotta artefacts included several loom weights, lamp fragments, and the head of a probable female votive figurine.

Based on preliminary spot dating, 240 sherds have been identified as diagnostic and are strongly concentrated in the Roman (94, 39.1%) and Classical periods (74, 30.8%). However, era-diagnostic finds dating to most periods are attested. Prehistoric finds included fine Mycenaean pottery, such as plain kylix stems and decorated wares of probable LH IIIA date. The diagnostic Classical finds are more common and included domestic wares, as well as black-glazed and red-glazed cups and bowls. Hellenistic and Roman wares included amphorae, tablewares and cooking vessels, and a beehive fragment. Most of the pottery is probably locally or regionally made, with some tablewares of likely Athenian origin. The amphorae have a wide-ranging provenance. In addition there was African Red Slip Ware from Tunisia, and Late Roman C tablewares from western Turkey. The ceramic material of later antiquity includes Middle Byzantine (12th-13th c.) and Frankish (13th-15th c.) fine wares, with glazed, painted or combined painted and sgraffito decoration, as well as some glazed sherds of possible Ottoman date.

Finally, the metal finds comprised exclusively pieces of iron slag and suggest there was local industrial activity for the processing of iron ore. The resources of the broader Aphidnian landscape include iron ore deposits to the northeast. It remains to be determined if these areas were exploited in antiquity.

The future fieldwork and the study of finds will shed further light on the use of the resources in antiquity. The 2019 finds certainly suggest local ceramic production and iron processing took place within KASP’s area of interest. 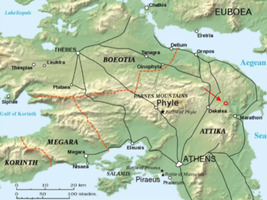 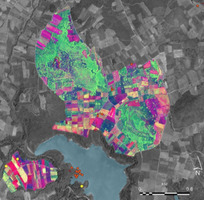 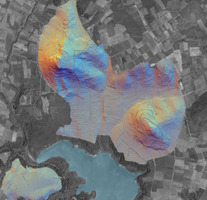 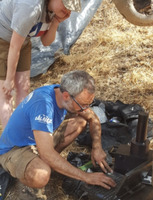 Fig. 5/ The distribution of finds and densities: pottery sherds (left) and tiles (right) 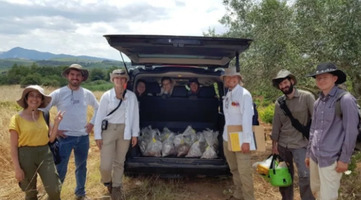 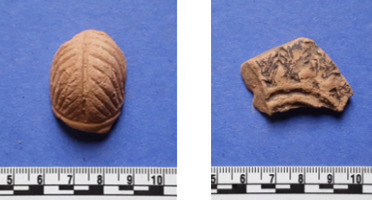