Troezen, Vareia Taktikoupolis district (property of M. Eleni). Maria Giannopoulou (ΚΣΤ’ ΕΠΚΑ) reports on the discovery of a long section of wall, some 42m long and 0.5m wide, running NS. Associated fill contained both black-painted sherds of the Classical period, awhile the foundations sat on a level of grey-soil containing unpainted sherds of the Early Helladic period and obsidian flakes.

In the E of the site, another NS wall was found, whose width varied between 0.5 to 0.9m, and was 15.3m long. At its S, another wall (of width 0.5-0.65m and length 8.60m) intersected it in the orientation NE-SW, while at a further S point an EW wall also intersected. These walls were associated with Geometric period sherds, including also loomweights. 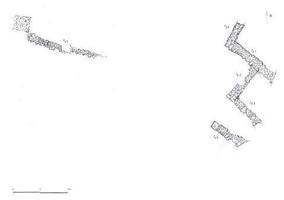