Aegina, intersection of Kapodistrion Street and Faneromeni Street (property of G. Skaltsiotis). Sophia Michalopoulou (ΚΣΤ’ ΕΠΚΑ) reports on the discovery of a series of graves, comprising part of the cemetery in the east of the city (Fig. 1).

Graves 1 and 7 are rock-cut tombs, with the main chamber underground. Grave 1 is oriented EW, and was found 1m below the road surface. Six steps lead down into the tomb (Fig. 2), while the chamber (3 x 2.70 x 1.72m) has a flat roof and sloping floor. Burials were located on the sides of the chamber, most likely in sarcophagoi. A rectangular stone column was preserved in the SW corner (Fig. 3 and 4) presumably for structural support. The tomb is thought to date to the fourth or third century BC.

Graves 3 and 4 are cist graves, undisturbed but poorly preserved. They are thought to date to the fourth century BC.

These graves were situated on top of Grave 5, and older burial dating to the archaic period (Fig. 5).

Various wells were also identified, perhaps contemporary with the graves or from a later period. They were filled with pottery of the sixth and fifth centuries BC. 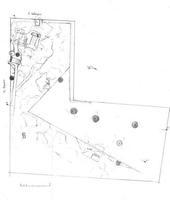 Fig. 1/ Plan of the cemetery east of the ancient city

Fig. 2/ Grave 1. View of the stairs leading into the chamber 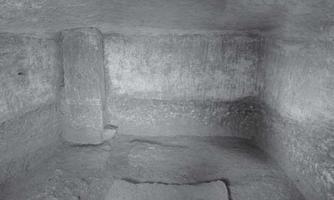 Fig. 3/ Grave 1. View of the inside of the chamber 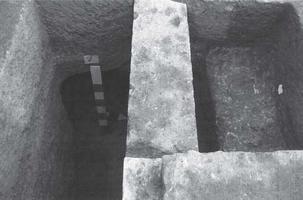 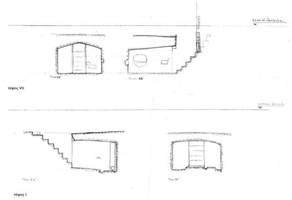