The survey research in the basin of Megalopolis has three main goals: (1) to locate archaeological and palaeoanthropological remains of the Lower Palaeolithic period and particularly of early Middle Pleistocene age; (2) to develop a chronostratigraphic framework for the hominin presence in the Megalopolis basin during the Palaeolithic period; (3) to reconstruct the paleoenvironmental conditions and the geological evolution of the basin. The research focuses on locating finds that are stratified inside undisturbed geological deposits, so that the finds can be subsequently placed within a broader chronological and palaeoenvironmental context. Moreover, as the emphasis lies on locating sites older than the known Lower Palaeolithic site of Marathousa 1 (see Report for 2018, as well as Karkanas et al., 2018 and Panagopoulou et al., 2018), there is a priority in targeting deposits which underlie the Lignite Seam II (Löhnert και Nowak, 1965). The surface survey, which aims to discover new archaeological sites, was conducted by a small team of archaeologists specializing in the Palaeolithic, as well as paleontologists, who together examined the long profiles created by the mining operations inside the lignite mines. The research on the geomorphological, tectonic and paleoenvironmental evolution of the basin was conducted by an international team of geologists and geoarchaeologists, who examined various tectonic and sedimentary structures, and collected geological samples for laboratory analyses. FieldMove™ and FieldMove Clino™ software were used on tablet PC and smartphones for the acquisition and plotting of structural data, together with measurements taken by traditional geological compass.

The survey units 6, 7 and 9, located in the north-eastern and northern part of the Marathousa Mine, were re-examined. In survey unit 6, the focus of the survey was the stratigraphic level of the site Marathousa 2 (see Report for 2018), from which a hippopotamus tooth and a deer phalanx were collected. The hippo tooth will be used for isotopic analysis, which provides paleoenvironmental proxies, whereas the deer phalanx will be examined for possible anthropogenic cut-marks as well as for its taxonomic identification. Furthermore, sediment samples were collected from the fossiliferous horizon and they were subsequently water-screened; these will be further processed at the Wiener Laboratory (ASCSA) to be examined for fossils of micromammals, which serve as biostratigraphic and paleoenvironmental indicators (Fig. 1). In survey unit 7, two layers rich in mollusks and mammal fossils were surveyed, which underlie Lignite Seam II. The following fossils were collected from this survey unit, to be examined further in the laboratory and under the microscope for potential evidence of anthropogenic processing (e.g. cut-marks or intentional fractures), as well as for their taxonomic identification, which in turn provides biostratigraphic, biochronological and paleoenvironmental indications: carnivore humerus (Family: Mustelidae); metacarpal fragment, phalanx, premolar, metatarsal and radius fragment of deer; as well as bird and turtle bones. Furthermore, geological samples were collected for radiometric dating with the method of Electron Spin Resonance (ESR); sediment samples were also collected for water-screening and subsequent sorting for the identification of micromammals.

In the mine of Choremi, Site 5 of survey unit 7 was re-visited, and two new survey units were examined: survey unit 9 in the north-west part and survey unit 10 in the northern part of the mine. In both units, the examined profiles consisted mostly of greenish sandy sediments with intercalations of bluish clays, which were massively bedded, lacking rock clasts and with few to no organic material or visible fossils. Therefore, those deposits were deemed unpromising and it was decided that they do not require any further examination in the future.

In the Kyparissia Mine, survey unit 4 was examined; this is located in the western part of the mine and includes the site KYP-4, which has yielded numerous vertebrate fossils in the past (Athanassiou, 2018; Athanassiou et al., 2018). The site is found ca 25 m below the pre-mining operation surface. During the survey of the broader area of KYP-4, a number of large mammal bones were located and collected, which were found embedded inside clastic sediments. Two areas, which lie ca. 15-20 m. apart and yielded the highest find densities, were designated as Area A and Area B. In Area B, hippopotamus remains that probably belong to a single individual were found stratified in dark clayey sediments rich in organic material and mollusks. During the collection of the fossils, a lithic artifact was retrieved from a dark lignite layer, which overlies the fossiliferous horizon and has been disturbed either by tectonic movements or by mass wasting processes (e.g. landslides). Soon after this discovery, another lithic artifact was identified stratified in a nearby profile of Area A (Fig. 2), which yielded also stratified remains of large mammals. Subsequently, the team conducted meticulous cleaning of the exposed profiles in order to study and document the stratigraphic sequence; during the profile cleaning, 8 more lithic artifacts were located and collected from Area A. The artifacts derive from two subsequent layers, rich in organic remains, in which bones were also found in direct spatial and stratigraphic association with the lithics. In total, the fossil bones collected from both Area A and B of the site KYP-4 include remains of hippopotamus, deer, rhinoceros, turtles and birds. Sediment samples were collected for water-screening and also for radiometric dating with the method of Electron Spin Resonance.

Alongside the surface survey for the identification of archaeological remains, the geological research on the geomorphological and paleoenvironmental evolution of the basin focused on the collection of structural and kinematic data from the study of exposed faults as well as other tectonic structures and landforms. The geological team examined the geological formations that comprise the basin's sedimentary sequence, assessing their depositional settings, their clastic material and the origin of the rock clasts, as well as their lateral and stratigraphic relationships. Data from geological maps and from the boreholes conducted by the mine were juxtaposed to the information acquired from present-day outcrops, which allowed us to formulate a set of working hypotheses about the mechanisms involved in the development of the Megalopolis sedimentary basin. Finally, the team also collected geological samples for luminescence dating.

Field work was conducted in the lignite mines of Marathousa, Choremi and Kyparissia, where the deposits underlying Lignite Seam II were targeted. A number of fossil bones and teeth of mostly large mammals were collected: these present apparent or potential evidence of anthropogenic processing and require further analysis in the laboratory, and/or they were found in stratigraphic association with lithic artifacts, or they constitute taxonomically diagnostic elements and they can therefore provide important biostratigraphic data. This year's field work produced more finds than that of the previous field season, and confirmed the conceptual prediction model that was formulated upon the launching of the project with regard to the litho-stratigraphic characteristics of potentially promising sedimentary horizons. The discovery of lithic artifacts in stratigraphic association with fossil bones in the site KYP-4 at the mine of Kyparissia extends the evidence of human presence beyond the area of the Marathousa mine (sites Marathousa 1 and 2) to include now the northwestern margins of the Megalopolis basin. Considering that the geological sequence of the Kyparissia mine essentially comprises of Lignite Seams I and II, it is likely that the Palaeolithic finds at the site of KYP-4 are older than the site of Marathousa 1 (which overlies Lignite Seam II and dates to ca. 400-500 ka BP). At the moment, however, this assumption can only be formulated as a working hypothesis, which needs to be further investigated with the application of radiometric dating and the placement of the site's local sequence into the broader chronostratigraphic framework of the Megalopolis basin. In sum, the results of this year's field work at KYP-4 are particularly promising and highlight the importance of the area in the investigation of the Lower Palaeolithic period in Greece. At the same time, the research on the geological and paleoenvironmental evolution of the basin resulted in the formulation of explicit and testable working hypotheses, as well as the deduction of significant conclusions regarding the geodynamic framework of the study area. 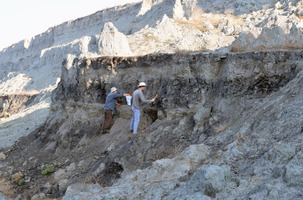 Fig. 1/ Collection of sediment samples from the fossiliferous horizon of the site Marathousa 2 (Marathousa mine, survey unit 6)

Fig. 2/ (a) View of a lithic artifact in situ embedded in an organic-rich sandy layer of the north profile of Area A, site KYP-4 (Kyparissia mine). (b) the lithic artifact of Fig. 2 (a