Key-words
Residence - Figurine - Lamp - Numismatics - Tools/weapons - Metal - Stone - Glass - Domestic space - Production/extraction site - Road system/waterway - Building Type - Find Type - Material Type - Site Type
Type of Operation
Excavation - Rescue excavation
Institution
Swiss School of Archaeology in Greece
Toponym
Érétrie, Eretria, Nea Psara (124/1960)
Linked Record
20082009
Report
Eretria. S. Fachard and T. Theurillat (Swiss School) report on a rescue excavation conducted in collaboration with the ΙΑ' ΕΠΚΑ (under A. Psalti) on the property (O.T. 737) of P. Vrakas, S of the plot excavated by P. Themelis between 1974 and 1984 (O.T. 740, summarized in PAE [1984], 212−28) (Fig. 1). The goal was to verify the extension of some structures discovered by P. Themelis and to ascertain the different chronological phases represented on the plot.
In the Geo period, 2 walls to the E protected the sector from intense flooding. M23 served as an embankment wall, preserving the settlement to the W from the sands and pebbles of the river to the E. It was built in ca. 725 BC, abandoned at the end of the 8th Ct and replaced by a 2nd embankment wall (M24). The function of M22 is more difficult to assess, since it seems unlikely to belong to the apsidal building, GG, restored by Themelis. The current absence of floor levels, pits or graves suggests that the area lies on the periphery of this settlement quarter. Occasional finds in the deepest layers include a small Neo serpentine axe and a MGeoII Attic krater (Fig. 2). Ar and Cl layers are rare, to the point that some Hel strata follow Geo layers. This may imply that the sector was scarcely occupied during these periods, although later construction has certainly obliterated earlier layers.
Most of the 2008 discoveries date to the Hel period. Several phases can be distinguished between the very end of the 4thCt BC and the 1st Ct BC. The N of the plot is occupied by a small street lined with 2 walls (M32 and M1). In a first phase, 2 pits (St33 and St19) of the first half of the 3rdCt BC were found S of M1. The pottery is mainly domestic in character, with a high proportion of cooking ware (lekanes, chytres, mortars, lopades) and drinking vessels (bowls and kantharoi). Several walls could belong to this first phase of occupation: M30 and probably M20 and M12. The floor level related to this phase is at 3.9masl. In a 2nd phase, M30 and M20 were reused to form a quadrangular building (8m x 6m) composed of deep foundation walls (M4, M11, M16 and M17). The pottery associated with the foundation trench suggests a tpq in the M2ndCt BC. Its function remains unclear since no clearly identifiable structures have been discovered inside. A well (St26) in the NW corner is probably contemporary, although it could also belong to the previous phase. Numerous finds related to metalworking were discovered in the immediate surroundings of the building: a low-shaft furnace (St3), connected with burned layers, slags and iron ‘skullcaps’, testifies to ore refining. M1 was probably pierced during the same phase, in order to install a threshold and canalization (St25) for the evacuation of waste water in the street. A coin hoard (St15) containing more than 30 badly preserved bronze coins was discovered at the foot of M12; their identification is not possible at present.
Although P. Themelis’ excavations showed that the entire quarter was densely occupied in the Rom period, few Rom remains were discovered in 2008. To the W, 2 foundation walls (M6 and M7) can be linked to the monumental building excavated by Themelis. To the E, a thick deposit of the 2nd and 3rd Cts AD seals the Hel occupation. This contains numerous fragments of glass and terracotta figurines, Italian sigillata, several lamps with decorated discuses and 3 coins of the Imperial period.
This first campaign on the O.T. 737 plot confirmed P. Themelis’ chronology of the Quarter of the Panathenaic Amphorae (O.T. 740) and supplements the plan of an important urban sector of the town occupied from the Geo to the Rom period.
Author
Catherine MORGAN
Bibliographic reference(s)
Unpublished field report,  Swiss School of Archaeology in Greece
Date of creation
2010-03-10 00:00:00
Last modification
2018-08-22 09:24:31
Picture(s) 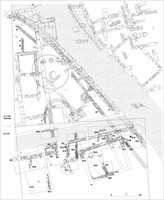 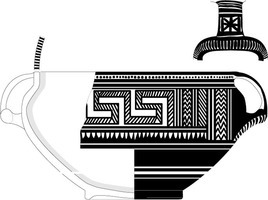