Key-words
Residence - Lamp - Tools/weapons - Minerals - Stone - Domestic space - Production/extraction site - Building Type - Find Type - Material Type - Site Type
Type of Operation
Excavation
Institution
Archaeological Society of Athens
Toponym
Anogeia
Linked Record
198819892004200620072008200920102011201220132014201520162017201820192020
Report
Zominthos. Y. Sakellarakis (ASA) reports on continuing excavation of the M settlement, focused on room 15 and area 19 of the central building (plan: AR 53 [2006−2007], 112).
The investigation of room 15 was almost completed. The room had an E entrance, a window in the W wall and 2 niches in the S wall. The floor was paved, and on it was found a large quantity of vessels of various types such as handleless conical cups, bridge-spouted and cylindrical cups, large and small lopades, kalathoi, amphoriskoi, braziers, prochoes, stirrup jars, chytres, vessel lids, pithoid vessels and lamps, which date to LMIA. It is likely that room 15 was used as a workshop to judge from the number and position of the vessels, from certain features and from the discovery of pieces of quartz (rock crystal). The latter is found in the area around Zominthos. On the basis of his research at Zominthos and in the neighbouring cult site in the Idaean cave and the M peak sanctuaries of Iouktas, Kofinas and at Ag. Giorgios on Kythera, the excavator proposes that natural, polyhedral crystals were used in certain M cult practices.
In room 15, pieces of pyrolusite (manganese oxide) were also found; this has a semi-metallic sheen, comes from Melos and Lavrion, and can be used in the preparation of pigments and the production of porcelain. The excavator’s view that room 15 was a workshop is strengthened by the discovery of tools such as grinders and obsidian blades.
Three large cylindrical ceramic vessels with feet, decorated with the well-known M reed motif, were found in one of the 2 niches in the S wall (Fig. 1); these are similar in shape to stone vessels. All 3 have holes in the base and were used as rhyta. According to the excavator, ‘the discovery of these vessels underlines the dual purpose of the foundation of the large central building at Psiloreite, at an elevation of 1,187m, namely industry and cult’, noting also that it was located very close to the route leading to the Idaean cave. Numerous gorges cut S to the Libyan Sea, with perennial streams that would have created extensive wetlands in the E Holocene as the sea level rose. In addition, many local fault scarps have caves and rock-shelters, usually associated with springs, suitable for habitation. In area 19 of the central building, to the E of room 15, research concentrated in the E part. At some depth a wall of stone slabs was found, running from E to W and preserved to a height of 3 courses. Among the finds were 4 conical cups and fragments of other shapes such as kadoi and pithoid vessels, and beads of sard and agate.
Author
Catherine MORGAN
Bibliographic reference(s)
Ergon (2008), 98− 111
Date of creation
2010-03-10 00:00:00
Last modification
2018-08-22 09:24:31
Picture(s) 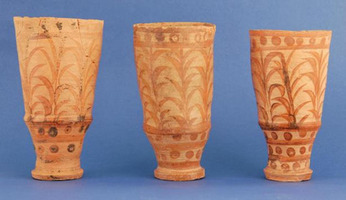