Key-words
Tomb - Hydraulic installation - Cemetery - Production/extraction site - Territory - Building Type - Site Type
Type of Operation
Study
Institution
British School at Athens
Toponym
Knossos, Knosos, Cnossus, Cnossos
Linked Record
198919901991199219931993 (1)200520062006 (1)200720082008 (1)2009201020112011 (1)2012
Report
Knossos Urban Landscape Project (KULP). M. Bredaki (Director, ΚΓ' ΕΠΚΑ), A. Vasilakis (ΚΓ' ΕΠΚΑ) and T. Whitelaw (BSA/London) report on the 3rd and final season of fieldwork, which focused on 4 different areas on the periphery of the central block of land surveyed in 2005 and 2007 (Fig. 1).
The aim was to survey all of the landscape currently available for investigation which potentially may have been utilized for cemeteries or other outlying sites or activity foci relating to the urban site of Knossos, through all periods of its occupation. In 2007, investigation had concentrated on the areas of known cemeteries in the S part of the Knossos valley, within the protected alpha zone. Work in 2008 completed the coverage of the alpha zone, both to the E on the summit of Aïlias and the prominent hill to the NE, and in the far SW. While the latter area extends well beyond the zone of previously known remains, low sherd densities and scattered tombs were identified, and the investigation was also intended to provide a basis for the effective management of the alpha zone in this area, as well as taking the coverage far enough from the urban site potentially to encounter small outlying sites and track how they responded to the expansion and contraction of the urban centre. The W boundary of the alpha zone runs along the ridge occupied by Fortetsa village, though the steep E-facing slope was not surveyed as the surface record is swamped by mod. debris deposited downslope from the village. In the S and SE, coverage was extended to the extensive quarries at Ag. Eirene (never systematically investigated) and to the SE of Spilia, to ensure that the Knossian mortuary landscape stopped at the Spilia gorge, rather than extending beyond it, along the access route into the valley from the S.
To the N, the major focus of the year’s work was the Kephala-Isopata ridge, known to have been used for high status burials in later prehistory. This area is outside the alpha zone, and so has reduced protection, and is also a fast-developing suburb of Herakleion. While it was not expected that undisturbed tombs would be detected through surface survey, it was essential that all available fields on the ridge be investigated before they disappear beneath housing and other (for example, the new cemetery) developments. Coverage extended over the entire ridge and the slopes around the village of Kallithea, up to the national road and across it, to include the previously investigated Neo site at Katsambas. Some fields passed-by in either 2005 or 2007 were also surveyed, particularly along the Kairatos river.
Some 11,400 20m x 20m grid units were surveyed, bringing to 21,000 the total investigated during the 3 years of fieldwork. Approximately 30% of the 2008 units (with 72,000 sherds) were preliminarily processed; the remainder will be sorted in 2009. In addition, it was possible to finish initial processing of the material collected during 2007. The field methods followed those used successfully in 2007, involving collection units defined on a 20m grid, located on the ground using satellite imagery and 1:5,000 maps, with positions checked every few squares by GPS. Where feasible, 2 20m transects were walked across each square, usually along a side and down the centre, to allow scanning of the entire unit for features. A transect 1m w. was searched for material, so 40m2 (a 10% sample of the area in each unit) was intensively searched.
Numerous features were encountered, including likely tombs (principally Rom, in the S of the study area), small rock-shelters and the probable base of the Rom aqueduct, slightly upstream of the Ot aqueduct at Spilia. While a low density scatter of material of all periods was encountered over most of the investigated areas in 2008 (Fig. 2), the majority of the sherds recovered (ca. 57%), were of post-Rom date, not surprising given the amount of landscape surveyed in areas of new housing development. Some 23% of the pottery recovered was PH, primarily in light scatters flanking the Kairatos, probably representing cemeteries between those already known at Zafer Papoura, Sellopoulo, Kephala and Isopata. Two known areas of later PH occupation on the summit of Aïlias were better defined. Deposition in the Hellenic to Rom periods is highly nucleated at the city, with few outlying scatters and relatively little material recovered in the peripheral areas surveyed this season (11% and 8% of material respectively). One small Rom concentration on the summit of Aïlias is directly associated with the extensive limestone quarries, giving support to the Rom date hypothesized in the past. The earlier glazed wares among the post-Rom pottery are concentrated below Fortetsa and along the Kephala-Isopata ridge, where some etchings of the siege of Ven Candia (1648−1669) place the extensive Ot encampments. The 21,000 units investigated have yielded nearly 500,000 sherds and ca. 7,000 other finds. The 2008 season completed the surface collection phase of the project.
Author
Catherine MORGAN
Bibliographic reference(s)
Unpublished field report, British School at Athens
Date of creation
2010-03-10 00:00:00
Last modification
2018-08-22 09:24:31
Picture(s) 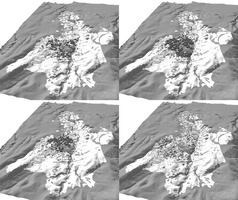