Galatas, plot of E. Kouli. Maria Giannopoulou (ΚΣΤ ΕΠΚΑ) reports on the investigation in the area of an archaic inscribed cippus (Fig. 1), originally discussed by Legrand but whose precise location was hitherto unverified. The inscription indicated the monument was erected to Praxiteles, and that further up was a tomb set up by the deceased’s friends.

Excavation to the E of the column revealed the full height of the monument as 2.15m, and 1.08m in diameter. It was fixed to the ground with small stone wedges. To the NE, the archaic stratum was disturbed by the construction of a Roman period cist grave, measuring 2.47 x 1.16m. This structure was made of brick, and covered with slabs or irregular shape and a layer of plaster. It contained nine skeletons, one of which was placed supine with the head to the E. The rest were positioned E and W in the tomb. To the S were two Roman oinochoiai and an iron strigil.

To the N another grave was discovered, oriented EW and measuring 1.70 x 0.6m. It contained a skeleton laid supine with the head to the E. 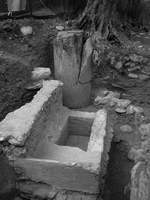 Fig. 1/ The archaic cippus of Praxiteles and the cist grave of the Roman period