Key-words
Fortifications - Cave - Building Type - Site Type
Type of Operation
Study
Institution
Ministry of Culture (ΚΔ' ΕΠΚΑ); American School of Classical Studies
Toponym
Episkopi
Linked Record
2008
Report
Kephali Aphroditis. P.P. Betancourt (ASCSA/Temple) reports on studies of this site, which was excavated in 1996 by T. Iliopoulos (ΚΔ' ΕΠΚΑ) and in 2003 by S. Apostolakou (Director, ΚΔ' ΕΠΚΑ).
The EMI site, which consists of a small 2-room building and courtyard surrounded by a fortification wall, is situated on a hilltop W of the village of Episkopi, overlooking the mod. road across the Isthmus of Ierapetra. The S room of the structure had a stone bin, and the N a bench along the N wall and a stone support for a wooden column to hold up the roof.
Nine or more large pithoi were preserved (among the earliest known in Crete) (Fig. 1), in addition to smaller clay vessels. Immediately N of the building was a large area where fires had burned the soil red. It is suggested that this was the location of a signal fire, with the fortified enclosure serving as a refuge for the local population. The wall also enclosed the entrance to a small cave which could have provided water and additional space for storage. The site provides new evidence for the unsettled conditions in E Crete at the beginning of the BA.
Author
Catherine MORGAN
Bibliographic reference(s)
P.P. Betancourt, Kentro 11 (2008), 12−13
Date of creation
2010-03-10 00:00:00
Last modification
2018-08-22 09:24:30
Picture(s) 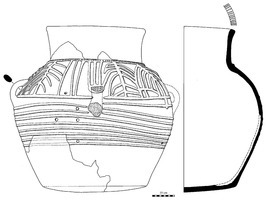