Key-words
Residence - Tomb - Figurine - Hearth/Kiln/Oven - Inscription - Tools/weapons - Painting - Dress and personal ornament - Metal - Bone - Domestic space - Production/extraction site
Type of Operation
Excavation - Research excavation
Institution
Archaeological Society of Athens
Toponym
Mycènes, Mykines, Mykinai, Mycena, Mycenae
Linked Record
19881988 (1)19891989 (1)20002002200420062007200820092010201120122013
Report
Mycenae. S. Iakovides (ASA) reports continued excavation on the acropolis, in the lower city and in the area of Petsas House.
On the acropolis, excavation of building K was completed (Fig. 1). The oblong building had on the E side 3 rooms at ground level and a staircase: a courtyard at the edge of the complex is delimited by the N Cyclopean wall. To the W of the rooms is an inclined passageway with an earthen surface, which leads into the courtyard. The rooms date to the 13th Ct BC and were built using materials from earlier structures. They remained in use for quite a short period and were destroyed ca. 1200 BC.
The 2008 excavation was limited to the area of the inclined passageway, over which were 4 dressed blocks with square and round sockets for connection with other blocks, as well as a round structure built of unworked stones, associated with a few sherds and bones. The LHIIIB2 destruction level, which bore traces of fire, contained sherds, tile fragments, animal bone and many small finds (mainly fragments of wall-painting, figurines, beads, stone grinders, obsidian blades and flakes, lead and iron objects, loomweights, strainers and spools). Among these finds were a half-worked sealstone with no decoration and a clay sealing baked in the fire which destroyed the building (Fig. 2). It bears a depiction which can with difficulty be read as the Linear B ideogram for oil.
Excavation continued in the lower city (Fig. 3). As in 2007, the topmost level dated to the Hel period: in the NW square, an apsidal building and remains of a potter’s workshop were found. There may have been a kiln here. Immediately S of the apsidal building was the external wall of a large building, and beneath it an orthogonal cist tomb with the skeleton of a mature individual, probably female, accompanied by 5 Geo vessels, a pin and an iron ring, all dating to the 9th Ct BC (Figs. 4-6). In the SE sector lay an apsidal building of which the 2 end walls were preserved along with the interior cross walls. The building appears to be Myc and is partially covered by Hel remains and part of a cobbled road. Various small finds were discovered, including obsidian, fragments of wall-painting, pigments, animal bones, sherds, metal objects and coins, which date to the Myc, Geo and Hel periods. The remains of historical periods are separated from those of the Myc period by a thick level of reddish-brown earth washed down from the slopes of the surrounding hills and from Mt Sara, which dominates the site of Mycenae.
At the so-called Petsas House, examination of area B was completed in 2008. On its floor, which was strewn with earth and sherds, were traces of fire and burnt bricks from the super-structure which was in part wooden. The S and N walls of the room were not found, and it is suggested that the room was unroofed. Area 10 was partially investigated in 2007, with work completed in 2008. Neither the S wall nor a normal floor were found. It was filled with destruction debris, with a layer of fire debris on the bedrock. Among finds from this fill are figurine fragments and sherds of at least 6 LHIIIA2 stirrup jars similar to those found in 1950 in room A. In room T, 2 rectangular sandstone bases each had a rectangular cutting in the centre and other smaller cuttings around (Fig. 7) to accommodate wooden supports either for the roof or for an upper floor. In 2007, part of a carbonized beam was discovered in the N part of the room: in the S part are fragments of wallpainting.
Finds from room T provide important information about the upper floor, which was decorated. Pithoi indicate organized storage of the commodities necessary to maintain a large household and workshops. It appears that the space was used for the manufacture, or at least the storage, of vessels and figurines. The pottery confirms that the area was destroyed towards the end of LHIIIA2. In 2007, the bases of 6 pithoi were found in Room Y, in situ on stone slabs sitting in small stones and mud. In 2008, 4 further bases were found, plus one slab without a base. Thus the room contained at least 11 pithoi.
Hundreds of sherds were found in the course of the 2008 excavations in the Petsas House, plus 17 complete or restored vessels, and an abundance of small finds, mainly fragments of wall-painting. Figurine fragments were also found, as well as 2 sealstones, a piece of repoussée gold leaf, fragments of ivory and objects of stone and glass paste.
Author
Catherine MORGAN
Bibliographic reference(s)
Ergon (2008), 35-45
Date of creation
2010-03-11 00:00:00
Last modification
2021-03-02 20:30:21
Picture(s) 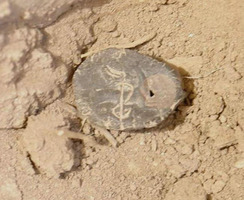 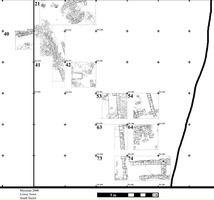 Fig. 4/ Fig. 4. Mycenae, lower city: pottery from the cist grave S of the apsidal building in the NW square. Fig. 5/ Fig. 5. Mycenae, lower city: iron ring from the cist grave S of the apsidal building in the NW square.

Fig. 6/ Fig. 6. Mycenae, lower city: pin from the cist grave S of the apsidal building in the NW square. 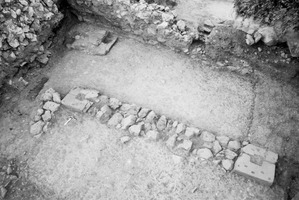