Drosia, 4 Kostis Palamas Street (O.T. 7, property of A. Pelekis and Ch. Belliou). Aikaterini Avramidou (1st EBA) reports that during the excavation of test trenches by B’ ΕΠΚΑ at the property of A. Pelekis and Ch. Belliou, Byzantine era finds were located in the central-east sector. The subsequent excavation was taken over by A. Zioviris, Ch. Naoumis, A. Valeris, A. Theodoropoulos and K. Xanthoulos of 1st EBA.

Three stone structures came to light (walls 1, 2 and 3), which formed a rectangular enclosure, slightly enlarged on the E side (Fig. 1). The structure was oriented W to E and is thought on the basis of a millstone found here to have been a storage building. The N and S walls extended to the E. The intersection of the S and W walls was also preserved, and ran to the projected SW corner of the building. The structure of the NW walls was less clear, owing to trees and roots that obscured the shape of the structure.

Painted and glazed ceramic were found, mainly from the Late Byzantine era, and also a bronze coin. Both the dating of the finds and the typology of the wall led the excavators to believe the structure was Late Byzantine in date. 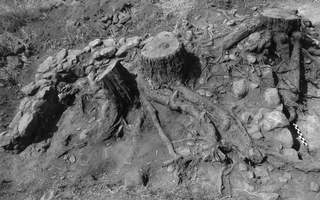 Fig. 1/ Remains of the storage area