Avlemonas, Kythera. Dr Dimitis Kourkoumeli (Ephorate of Underwater Antiquities) reports on the 2019 excavations of the Mentor shipwreck, at Avlemonas on Kythera.

The Mentor sank after colliding with rocks outside Alvemonas port in September 1802. Its principal cargo consisted of 17 crates of antiquities packed by Lord Elgin’s team, and these were recovered almost immediately after the vessel sank.

This year’s excavation was conducted between 27 August – 15 September, and focussed on cleaning the area for photography and conservation (fig. 1). Conservation work had begun in 2012. Excavation also continued in the area of the ship’s broken hull, and this same sector had first been investigated in 2017. A large number of dismantled planks and beams were found buried in the area.

Small finds identified and recovered include a glazed kitchenware pot (fig. 4), a gold ring with stylised flowers (fig. 5), gold earrings (fig. 6), a wooden compass (fig. 7), and a fragment of a Rhodian amphora handle stamped with the word ‘ANTIMACHOU’, three chess pieces (four had previously been found), various bone and wood objects, and a substantial number of pulleys (at least ten) to which ropes were fastened (fig. 8). This likely confirms the findings of 2017 relating to the position of the ship’s two masts, and to other wood and iron attachments.

This work was conducted under the auspices of the Ministry of Culture and Sports, and was supported by the Ilios Shipping Company.

Fig. 1/ Cleaning of the ship's hull 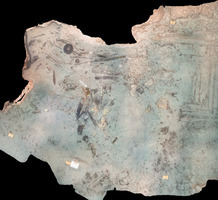 Fig. 3/ Photomosaic of the excavation site 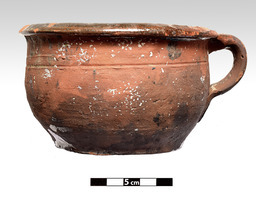 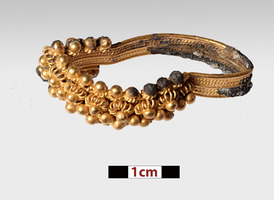 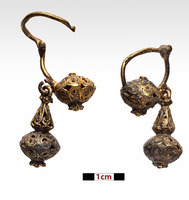 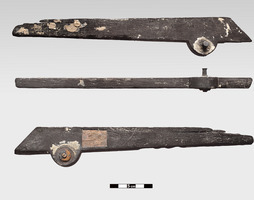 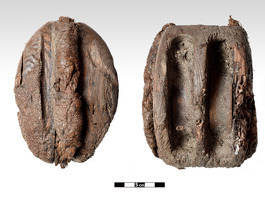 Fig. 8/ Wooden pulley to be attached to mooring rope