Peirou-Parapeirou Dam, Roïtika. Vasileos Argyropoulos (ΣΤ ΕΠΚΑ) reports on the discovery of 18 graves of the Classical period, part of the Classical-period cemetery. An ancient drain was found in the cemetery as well.

Grave 1 (pithos): the pithos is pointed and lying on its side with the mouth to the SE and covered with a square slab (Fig. 1). Inside there were vestiges of cremation and the remains of a skull of an infant. Grave goods: 14 vessels (3 kantharos-shaped pyxides with lids [Fig. 2]; 8 pyxides with globular body and lids [Fig. 3]; 3 small lekythoi [Fig. 4]), 1 clay apple (Fig. 5), 2 silver-plated iron pins, 1 pendant with an amber bead (Fig. 6). During the conservation, inside 2 of the pyxides, 2 joining sherds of a skyphos were found; while in another pyxis, part of an iron needle was found that probably belongs to a pin. The grave is dated in the first half of the 5th c. BC.

Also, 1 m from Grave 1, there was a cremation pyre: no finds.

Grave 2 (cist): made from tiles; head to the SE. From the interior only 2 pendants of amber beads were collected.

Grave I (Fig. 7; cist): made with schist slabs; head to the SE. Next to the head, two lekythoi were found (Figs. 8-9), a skyphos fragment was also found. The grave is dated to the end of the 5th c. BC.

Grave II (Fig. 10; cist): made from rectangular clay slabs and covered with an over-sized schist slab. Most likely this was a female burial with the head to the SE and turned to the W (Fig. 11). Around the legs were 4 lekythoi (Fig. 12) and 2 bronze rings, and in the pelvis a bronze mirror were found, also fragments of bronze earrings at the head. The graves dates to the end of the 5th c. BC.

Grave III (Fig. 13; cist): made from rectangular clay slabs; head to the SE. Only a few skull bones are extant. Around the lower legs, 1 lekythos and 1 hydria with painted palmette decoration (Fig. 14) and a miniature pot were placed. The grave is dated to the end of the 5th-beginning of the 4th c. BC.

Grave IV (cist): made from rectangular clay slabs, almost completely destroyed. A lekythos probably belonging to the grave goods dates the grave to the last decades of the 5th c. BC.

Grave V (cist): made from Corinthian tiles. The skeleton has decomposed; only a silver ring with a circular bezel which sports a golden knob where the L hand should be was found.

Grave VI (cist): made from Corinthian tiles. A black-glazed kylix with a high stem (Fig. 15) that is dated between the end of the 5th and beginning of the 4th c. BC.

Grave VII (Fig. 16; limestone sarcophagus): there is relief decoration along the lip (Fig. 17); the head is to the SE; in the R hand of the deceased a bronze strigil was placed, while the handle of an iron strigil was found in the area of the pelvis. Probably the head was crowned with a wreath from which a few gold-wrapped clay myrtle fruits and gold-plated bronze leaves remain. According to the type of the strigil, the grave dates to the end of the 5th - beginning of the 4th c. BC.

Grave VIII (limestone sarcophagus): not excavated because beyond the limit of the excavation trench.

Grave X (pit): covered with a large stone slab; an iron strigil in the R hand was the only find from inside the grave.

Grave XI (pithos): the pithos was lying on its side with the mouth to the NW. Inside the pithos there were pieces of bones and the skull of a child. Two pyxides with globular body and a lid, similar to those of Grave 1, were the only grave goods. Date: first half of the 5th c. BC.

Grave XIII (cist): made with rectangular clay slabs; not excavated.

Grave XIV (cist): made with rectangular clay slabs; head to the SE; only the skull was found and no grave goods.

Grave XVI (cist): made with rectangular schist slabs and a displaced over-sized schist slab covered it. No grave goods or bones found. 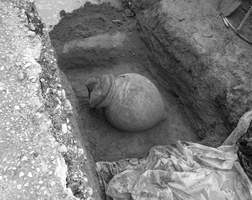 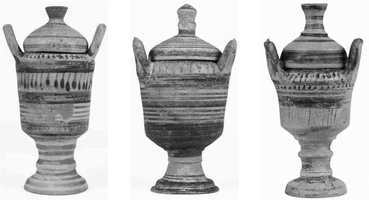 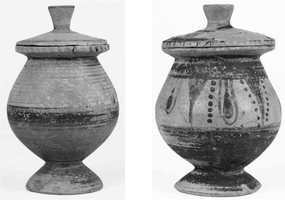 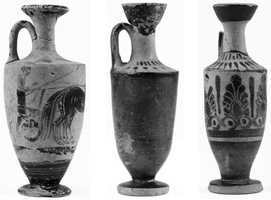 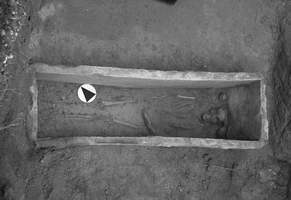 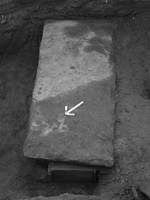 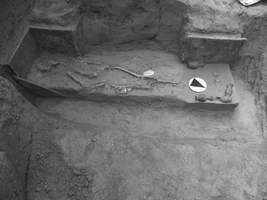 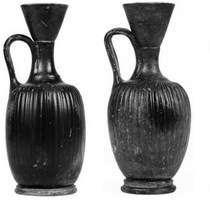 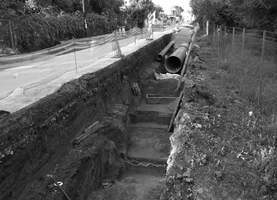 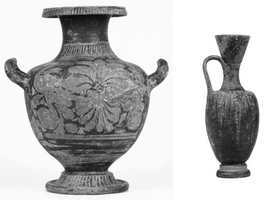 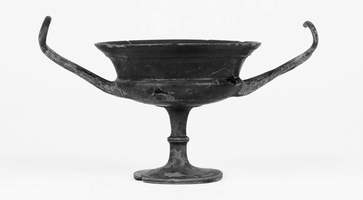 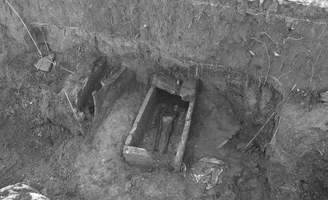