Building D (Fig. 1): part of the N side of a house; 2 spaces were discovered (Room 1; Area 2). The pottery shows that the house was initially constructed in the late Classical period (4th c. BC). At some point later, it was renovated and new walls were added. The house was in use until the middle of the 3rd c. BC when it was abandoned. Among the finds there is a bronze coin of the city of Elis, dated in the middle of the 3rd c. BC. On the obverse there is the head of Zeus; on the reverse, a horse and the letters FA and ΠΥΡ.

Building E (Fig. 2): a few m to the W of Building D and of roughly the same date. Among the finds: 4 bronze coins of which only 1 can be dated (coin of Corinth dated 400-300 BC; obverse: Pegasus; reverse: trident).

Building E1 (Fig. 3): to the W of Building E. Only part of one room is revealed of this building, but the work has shown that there is a building next to it. From the small finds, the building is dated to the 4th-3rd c. BC. A few fragments of late Archaic and early Classical pottery were found below the foundations of the walls and indicate the space was used before the building was constructed. 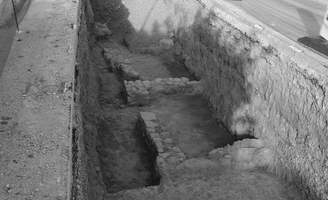 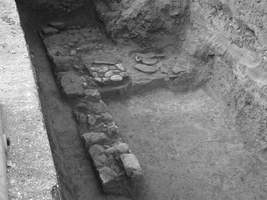 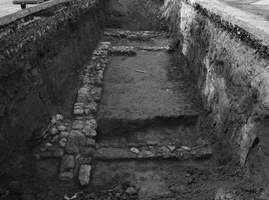