Key-words
Public area - Cemetery - Road system/waterway - Public building - Tomb - Stoa - Hydraulic installation - Honorific monument - Hearth/Kiln/Oven - Inscription - Lamp - Numismatics
Type of Operation
Excavation - Rescue excavation
Institution
ASCSA
Toponym
Agora antique, Athenian Agora
Linked Record
1999200020022004200620072008 (1)200820092010201120122013201420152016201720182019
Report
Athens, Ancient Agora. John Camp (ASCSA) reports on continued excavation. In Beta Theta East they excavated the top of a large marble block (base) just south of the Eridanos river (Figs 1-3). The face of the block carries a dedication by a group of epimeletai (overseers) to Leos, one of the 10 Eponymous Heroes of Athens.
[Ο]Ι ΕΠΙΜΕΛΗΤΑΙ ΤΩΙ ΛΕΩΙ ΑΝΕΘHΣΑΝ
ΣΤΕΦΑΝΩΘΕΝΤΕΣ ΥΠΟ ΤΗΣ ΦΥΛΗΣ
ΔΙΚΑΙΟΣΥΝΗΣ ΕΝΕΚΑ
«The epimeletes dedicated (this) to Leos/ having been crowned by the phyle/ on account of (their) justice». The letter forms look 4th century BC, with no serifs.
The base of the statue of Eukles of Marathon (I 7650) was found in 2013 right next to this new base. They are both built into a very late structure just southeast of the Eridanos river (Fig. 3) and rest on mortared bricks, suggesting they are part of some sort of crude hydraulic installation, a tank or cistern. The brickwork and floor are covered in places with a thick reddish/pink waterproof cement. The fill, which higher up contained large amounts of discarded broken tiles, seems to be largely silt lower down, with few inclusions, and reflects the general and almost complete abandonment of this area in the 7th and 8th centuries AD. Deeper down was material from the late 6th century AD (combed wares, and Phocaean Red Slip Ware, form 10), while below the material seemed largely 4th/5th AD, including an almost complete keel-rimmed bowl (Fig. 3).
In Beta Theta West they found in the Byzantine fill another inscribed fragment (Fig. 4), preserving part of the Imperial nomenclature: Emperor (ΑΥΤΟΚΡΑΤ[ΩΡ]) and Caesar (ΚΑΙΣΑΡ[ΟΣ]). The letters are distinguished for being among the sloppiest and most poorly inscribed texts referring to a Roman emperor. They also found an Imperial bronze coin showing Themistokles, with owl and snake, standing on a warship (Fig. 5). They exposed the foundations of the southwest corner of the Painted Stoa, which had been backfilled several decades ago.
In Section Beta Zeta they continued excavation of the Bronze and Iron Age cemetery along the course of the ancient road. In deep fill, under the sparse remains of archaic walls, they found a small stone-lined cist (Fig. 6), which proved to be a child’s burial (J 2: 31). The remains had been laid out on a bedding of stones, with the head oriented towards the south. Two small pots, one an amphoriskos with zig-zag decoration, the other a small cup on a conical foot, suggest that the burial should be Early Iron Age in date, ca. 1,000 BC. It is possible that two infants had been buried in the tomb, one not more than a month old, the second between 9 and 11 months old. A second burial, disturbed by later walls, produced a small cup with flaring concave sides, and the wing bone of what has been described as ‘an exotic bird’. They also finished excavating most of the fill in the Mycenaean chamber tomb J 1: 10, and added several more vases to the count of grave goods (Fig. 7). Altogether, no less than twelve pots were part of the collection of offerings, along with stone spindle whorls, beads, and small metal tools. In all, they have identified at least ten tombs of varied types (chamber tombs, pit graves, cist tombs) ranging in date from the 14th to the 9th century BC, lining both sides of the road (Fig. 8).
In Section Ω they worked around the huge Roman house of the 4th century AD and found a deposit pit. Within the pit was a layer of ash, a complete rosette lamp signed by the fabricant Sekoundos (a Corinthian import to judge by the clay), and a bowl (similar to Agora V, H 13, though somewhat deeper). The purpose of this deposit was not entirely clear, though it may have served briefly as a hearth; the lamp and bowl seem to date to the 2nd century AD. Other finds perhaps of this period include an Athenian Imperial bronze coin, with the well-preserved head of Athena on the obverse. The reverse, more worn, was decorated with a bull’s head. Also recovered were several pieces of bone styluses, one of them carrying an incised inscription, partially preserved. 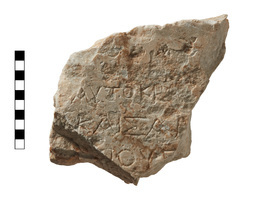 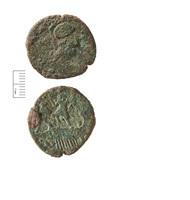 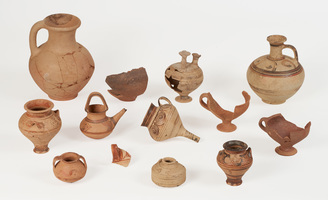 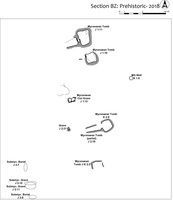