At KM 42+040, an ancient wagon road (orientation SSE-NW) of the Roman period (Fig. 1) and building remains of the Archaic period were found. The street was made of compacted gravel and a few stones and tiles. According to coins, the street dates from the 1st c. BC to 3rd c. AD. The road was defined by 2 walls. The E Wall was of elaborate construction. E/NE of the road, a wall parallel to the retaining wall was found; space in between was probably for rain runoff. In this space, a semi-circular shaft made of 3 stones was found containing a clay pipe. In the E part of the excavation a corner of a building dating to the Archaic period was found.

At KM 42+278, parallel walls were discovered with NE-SW orientation. They were built to channel an ancient torrent and there were 2 building phases. Small finds: bronze figurines of deer, and a bronze coin of Laconian issue from the reign of Hadrian, pottery of Archaic, Late Hellenistic, and Roman periods was collected.

At KM 42+589, part of an ancient road was found with N/NW-S/SE orientation. There were two street surfaces made of beaten sandy earth, gravel, and pebbles. A wall defined the road on the NE side. Two more parallel walls were founded on top of this one and ran parallel to the street. Layers of tiles and sherds and unworked stones occupied the space between these two walls. In the S section of these walls, 3 buttresses supported them. Probably the walls formed a drain along the ancient street. E of the street, a built shaft with a channel and fragments of walls was discovered. Due to the pottery and a bronze coin of Laconian issue from the years of Eurycles (1st c. BC) date these remains from the Archaic to Late Hellenistic period.

At KM 42+968, part of a wall was discovered with N/NE- S/SW direction. This defined the side of a torrent and functioned as a retaining wall of a modern field. Two groups of stones were found to the SSW of this wall. The pottery collected dates to the Hellenistic period.

At KM 43+050, in the central part of the excavation a wall with E/NE-W/SW orientation was found. In the rest of the space there were groups of stones. Two compact layers of beaten earth, ground tile, gravel, and stones (?street surfaces) were found below the wall. Mainly black-glazed pottery of the Classical-Late Classical period were found as well as two very corroded bronze coins. 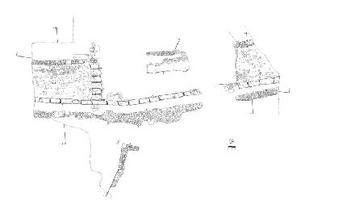