At KM 35+255 (Kopanitsa Vordonias), part of an aqueduct was found (Fig. 1). The length uncovered is 43.5 m and the width fluctuates from 1.5-1.8 m. The main route was N-S, but at some point it turns to the SE. A second section of the same aqueduct was found 76 m to the S, but it was not investigated. The horizontal cover of big stones shows wheel ruts of N-S orientation. This water channel was part of the “Hadrianic” aqueduct. The beginning of the aqueduct is at Vivari-Vordonias on the E bank of the Eurotas river.

At KM 38+470, 2 kilns were found: 1 was circular with entrance to S/SW and pottery was sparse and dated in the Classical/Late Classical; a bronze coin of Laconian issue of the Hellenistic period was collected from the area. Fifteen m NW a smaller kiln was found of elliptical shape with entrance S/SE. The pottery is as for kiln 1; clumps of clay, fragments of tiles, and fragments of bricks were also found. A corner formed by 2 walls was found NE of kiln 1. The use is unclear but was probably linked to the kilns. 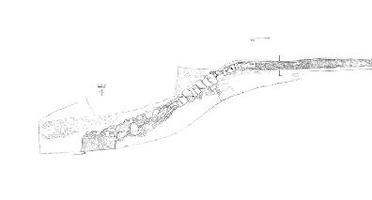