Sellasia, Brouliotika Ampelia or Kampos Sellasia (property of the company of Oinountas AE). Afroditi Maltezou (Ε ΕΠΚΑ) reports on the discovery of antiquities in the W part of the property, W of the modern olive oil bottling plant (Fig. 1). Cleaning of the older excavations to the E and SE of the building was also undertaken. From the cleaning, a destruction layer of tiles from the Hellenistic period were discovered. A sparse layer of stones and a few fragments of tiles and some Hellenistic pottery were located to the W of the building. A wall was also found in the E corner of the property. To the SW there was a fragmentary small wall, a small destruction layer of tiles and pithoi fragments and three iron nails. A few examples of Hellenistic pottery and a large quantity of iron slag was collected. 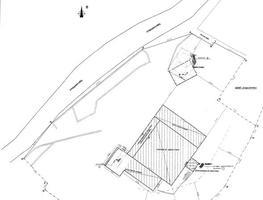 Fig. 1/ Plan of the excavation limits