Polydendro, Property of S. Fokas. Christina Kakourou and Afroditi Maltezou (Ε ΕΠΚΑ) report on the discovery of a cemetery of Final Neolithic period and a grave of Roman period (Figs. 1-2). The Roman grave (Grave 2) was found in the N part of the excavation with E-W direction, head to the W and tiles as pillow and floor, a pit was carved in the bedrock and the side walls are lined with tiles and it was also covered with tiles. An adult was buried with no grave goods. The other 6 graves are dated to the Final Neolithic or Chalkolithic period based on the pottery.

Grave 1 (N-S, head to S): no grave goods, uncovered, dead placed directly in the earth. The skeleton is fragmentary and the bones are in poor condition. A few unworked stones to the E of the grave perhaps marked it.

Grave 3 (E-WNW, head to E): WNW of grave 2; unworked stones cover an adult burial in contracted posture. At the legs and the head there were fragments of 2 vessels at each point.

Grave 5 (N/NW-S/SE): on the W edge of the excavation. Body in contracted posture and turned to the W (Fig. 3). Fragments of a pithos covered the head and the torso. The whole grave was covered by soil and a few unworked stones. Heaps of stones were found to the S and W of the burial. As the floor, fragments of pithos were used, while others were placed vertically in the soil around the head for protection. Obsidian flakes were found in close relation to the deceased. To the N of Grave 5, stones were found placed on top of fragments of pithos. Vestiges of burning probably indicate cremation because bone fragments were also found.

Grave 6 (E-W): E of Grave 5. A burial of an adult without grave goods; the bones are in poor condition, but the dead may have been oriented E-W.

Grave 7 (NE-SW): Adult burial. The dead was placed directly in the ground with contracted posture and turned to the N and covered with pithos fragments. The head was to the W. A pot was collected from the grave. 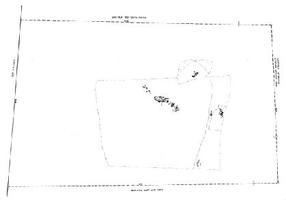 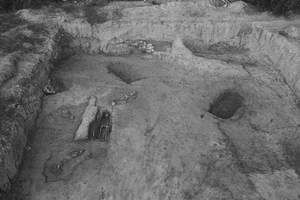 Fig. 2/ Overview of the graves from E 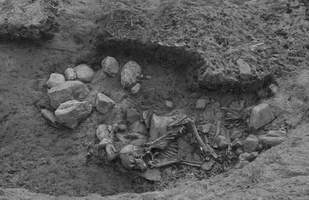