Sparta, Il. Gkortsologou Street (OT 124, property of N. Rapatas). Afroditi Maltezou (Ε ΕΠΚΑ) reports on building remains from the Hellenistic to the Middle Byzantine period on this property that is S of the Acropolis of Sparta (Fig. 1-2). The antiquities were so dense that the natural bedrock was reached in only a few spots. In the first building phase, a large built drainage system was found in the W part of the property. Two phases were distinguished in its use. The first phase (Wall 20 and 21) was constructed with poros stones of large and medium size and a few unworked stones, perhaps dating to the Hellenistic period. The seconnd phase (Walls 18, 19, 16) is dated to the late Hellenistic and Roman period. The orientation of both phases is NW-S. There are signs of repair to the drain. This drain was probably the continuation of the large built drain that was discovered on the Polychronakos property to the NW. In the E part of the property, 12 built and clay channels were discovered that terminated in the big built drain and belong to the 2nd phase. In the same space as the small drains an ancient street was uncovered made from beaten earth, gravel, a few tiles, and small stones. During its excavation, more than 1 street surface was discovered. The buildings of later periods make it difficult to determine the extent, direction, and final surface of the street. A surprisingly large building occupied almost the entire surface of the property and at some points it had very deep foundations. From the pottery, coins, and masonry, it can be dated to the Middle Byzantine period. The orientation was NW-SE. The building was founded on top of Roman-Early Byzantine remains and was probably a public building.

A cist grave was found attached to Wall 15 that belongs to the Late Roman-Early Byzantine phase. Inside the grave there were only disturbed bones. In this grave Wall 8 of the Middle Byzantine period was founded.

In the ENE part of the property a room was found. This was constructed above the drains of the E part and inside it 3 burial pithoi and the bones of 1 secondary inhumation were found. In the N part of the excavation, the SE part of a room was discovered.

Small finds: a complete golden ring (M39), a bread stamp (MS 17000), black glazed askos of the Guttus type (MS 17002), torso of a marble nude male statue (MS 17003), and 2 inscribed bases (MS 17005, 17009). A quantity of fragments of glass vases and fragments of marble revetments, and architectural members found in destruction layers or as spolia in walls. 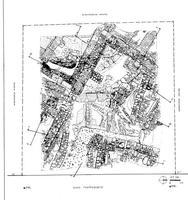 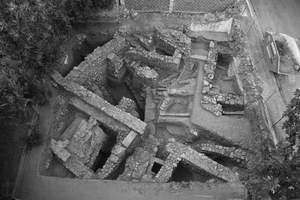 Fig. 2/ Overview of the site from S