Sparta, Intersection of Chamaretos and Orestes streets (O.T. 49a, property of the company of V. Koulogeorgiou and SIA AE). Afroditi Maltezou (Ε ΕΠΚΑ) reports on the discovery of a Roman cemetery in the E part of the property and 2 deposits in the W (Fig. 1), from which pottery of the Archaic-Classical until the Hellenistic period was collected. The antiquities had been partially destroyed by a modern building. In the cemetery, a burial building was recovered, clusters of built cist graves, as well as tile graves. The burial building was rectangular with NW-SE orientation. Inside there were 5 parallel burial niches below the level of the floor and the remains of a 6th one. The were made from bricks, mortar, and plaster. Remains of burials in the SW and NE side walls of the burial building show that there were burials on the floor of the monument as well.

Some of the cist graves existed prior to the building’s construction, while some others were attached to it after. Unworked stones and mortar were used for the building, while the interior was with bricks and mortar, some with plaster. The orientation of the tile graves was the same as the cist graves. Some graves had disturbed burials, particularly in the burial building; however, there were also graves with intact burials. The grave good include: lamps with figurative scenes such as deities, gladiators, mythological themes, or rosettes and rayed suns. The dead individual was accompanied also by small skyphoi, glass cups, and jewellery (e.g. silver ring). A characteristic finding is a fragment of an inscribed grave stele in which the word [ΧΑ]ΙΡΕ is extant. The grave goods, mainly the lamps, are dated in the 3rd c. AD and some in the 4th c. AD. This cemetery, which lies in the bed of a torrent, is similar to the SW Cemetery of Sparta. 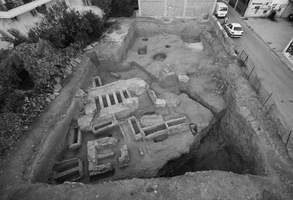 Fig. 1/ Overview of excavation from E