Sparta, Intersection of Archidamos and Lykourgos Streets (O.T. 53, property of I. Valioti). Afroditi Maltezou (Ε ΕΠΚΑ) reports on the discovery of part of a cemetery and deposit in the NE part of the property (Fig. 1). The deposit was partially carved into the natural bedrock in the NE corner. It contained fragments of tiles, lumps of clay, pottery, and many plaques and a few figurines. Also, 2 clay moulds were found. The finds suggest that the deposit was used as the dump of a workshop. Close to the property, an area of industrial use had been excavated previously. A bronze coin dating to the reign of Emperor Gallienus (AD 253-268) was found. Also in the rest of the excavation area, scattered figurines and plaques were found.

A cemetery occupies the rest of the excavated area. The graves were fragmented and their orientation was E/NE-W/SW or N/NW-S/SE. Schist slabs or unworked stones formed the sides. Schist slab, stone slabs, unworked stones, or clay slabs covered the graves. There were no grave goods and the skeletons were in poor condition. The heads were towards the E or N. In Grave 1 a second burial was discovered below the visible one and in Grave 6 a secondary inhumation was found. The best-preserved grave is Grave 8 (Fig. 2). A clay slab, placed vertically and close to the W narrow side divided the grave into two sections. In the E section, a grave of an adult in supine position with head to the E and a small stone used as a pillow was found. In the W section of the grave, a few bones were found. After the removal of the skeleton in the E division, a clay slab was discovered which covered the secondary inhumation. From construction details and the pottery discovered in a few cases the graves can be dated to the Archaic-Classical periods. Graves of the same period have been found in the same area. A Laconian coin of the years 43-31 BC was found in the W part of the excavation in a pit carved into the bedrock.

Fig. 1/ Intersection of Archidamos and Lykourgos streets. Overview of the excavation 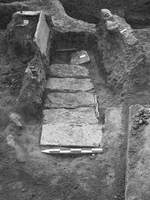