Sparta, Protection, shaping, presentation and integration of the archaeological sites of Sparta (Fig. 1). Chara Giannakaki and Afroditi Vlachou (Ε ΕΠΚΑ) report on excavation research in the Dichoncho (double-apsed) building. The interior of the building was investigated and it was discovered that over time many repairs, changes, and additions had occurred. In the S part of the central space, 2 storage granaries were found of the post-Byzantine period. While in the space between the building and the sanctuary of Athena Chalkioikos, 2 cisterns of the Byzantine period were located and architectural members as spolia. The fills removed from the building were very disturbed. A lot of pottery of the early Christian and Byzantine period and some of the Hellenistic and Roman were found, as well as fragments of clay figurines, many metal objects and accessories, fragments of glass vessels, bronze coins mainly of the Middle Byzantine period, and several fragments of marble architectural members belonging to earlier buildings of the Acropolis. The building had a secular use from the early Christian until the Middle Byzantine period. That it was constructed above the N part of the koilon of the theatre dates its construction after the 4th c. AD. Perhaps it has a relationship to the nearby early Christian basilica. 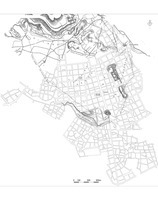