Metamorphosi (Skarmingas), Church of the Metamorphosis of the Saviour. Mihalis Kappas (26th EBA) reports that during restoration works in the building, extensive excavation took place in the interior, which revealed a grave of careful construction placed on the axis of the W wing of the church, exactly in front of the main gate (fig. 1). The grave contained a secondary inhumation and a primary burial. Fifty-one bronze coins of Manouel Komnenos were discovered in the fill around the burial which did not constitute a hoard, since they were scattered (fig. 2). This is a rare find in a Byzantine mortuary context and it is not a well-studied phenomenon.

Three graves of poor construction without grave goods were found below a thick fill layer in the narthex (fig. 3). Among the finds from the excavation there are large quantities of pottery sherds of various types. In the area of the holy bema, an inscribed fragment of a vessel of liturgical use was found. The inscription reads “πίετε εξ αυτού πάντες” (fig. 4) and thus reveals that the sherd belongs to the communion chalice (dated to the 12th c. AD). Most of the sherds are dated to the 12th c., some exceptions come from workshops of the Arabic world, notably a thin sherd of a Fatimid vessel of the 1st half of the 12th c., which is decorated with a harpy (fig. 5). Only the head of this mythical creature is extant and is of golden colour. Important Arabic clay vessels of the same period have been found in Southern Greece.

The most important find of the excavation comes from the fill in the narthex. It is a small bronze cross (fig. 6). On the front of the cross the Theotokos Deomeni (praying) is represented; on the other side, a full-body representation of a saint in frontal posture is shown. Similar crosses have been found in various cities of the Byzantine empire and are usually dated in the 11th c., but also continue into the 12th c.

The coins from Grave 1 constitute a terminus ante quem for the construction of the church. On the other hand, the existence of the secondary inhumation suggests a date before the reign of Manouel, probably in the first half of the twelfth century, when his father Ioannis Komnenos ruled the empire. 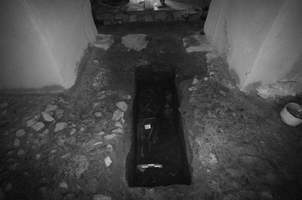 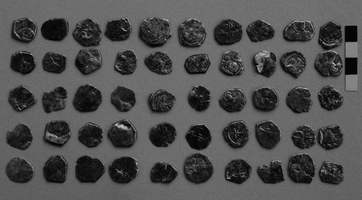 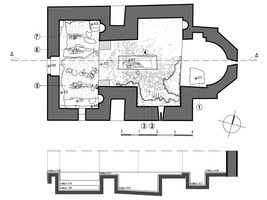 Fig. 3/ Plan and W section of the church after the excavation 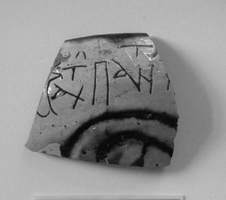 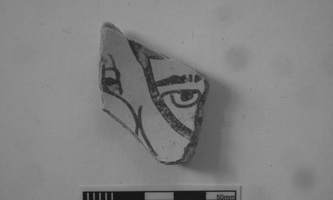 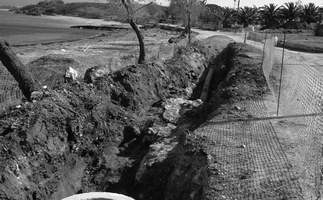 Fig. 6/ Cross with engraved decoration on both sides