Key-words
Domestic space - Residence - Tomb
Type of Operation
Excavation - Rescue excavation
Institution
Δ' ΕΠΚΑ
Toponym
Asinè, Asini, acropole
Linked Record
198919901990 (1)1990 (2)199119941994 (1)199619972002200520092010
Report
Ancient Asine, acropolis shore. Christos Piteros (Δ’ΕΠΚΑ) reports on the discovery of antiquities to the west of the Hellenistic/Roman walls of the ancient city of Asine (Fig. 1), including part of the foundations of walls of a rectangular building dated to Late Helladic IIIB. To the west of the foundation was a deposit with flysch waste and pottery attributed to the Early Bronze Age II-III (Fig. 2). To the west of this deposit was a partially submerged stone structure. Further to the west and on the shore was found a prehistoric cist grave and large limestone blocks being eroded by the waves. Along the lower western slopes of the hill and aligned on a N-S axis was an Early Bronze Age enclosure wall (Fig. 3). The walls continued along the northern part of the hill up until its rocky north-eastern corner, where the main entrance to the acropolis is located. Outside of the walls, both along its western and northern sides were the foundations of buildings, Middle Helladic graves, Early Bronze Age pottery and Byzantine fortification walls (Fig. 4). On top of the acropolis, part of a three aisled Byzantine church can still be seen under the modern chapel of the Virgin Mary (Fig. 5).
Author
John BENNET
Bibliographic reference(s)
ADelt 64 (2009) Chr., 287-290.
Date of creation
2019-08-13 18:07:26
Last modification
2021-07-29 17:41:35
Picture(s) 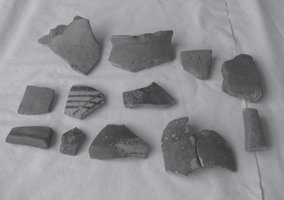 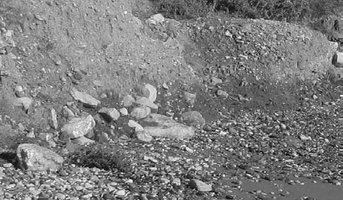 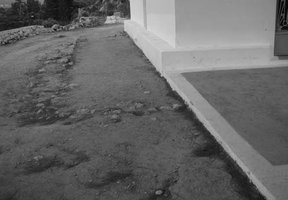 Fig. 5/ Ancient Asine: Outline of a Byzantine church under the modern chapel of the Panagia.