Ancient Thouria, Ellenika (Property of G. Poulopoulos). Xeni Arapogianni (ΛΗ ΕΠΚΑ) reports on the excavation of a rectangular, almost square building (4 x 4 m; Building 1) near the visible part of the ancient city wall. Its foundations are formed of large limestone blocks. Trench 1 within the building is oriented N-S, cutting the building in the middle. The best-preserved, southern section of the wall consists of 2 blocks with a rough inner edge formed by a staggered arrangement (fig. 1).

A marble bottle was found on the second step. To a depth of 90 cm, a large number of fragmentary tiles are present, probably from the collapse of the roof, and much pottery of Hellenistic times. Below this the soil is pottery free and slightly damp. Just outside the north wall, lying almost parallel to it, a fluted column broken in two was revealed.

Another exploratory trench was dug to the east of Building 1. About 3 m from its NE corner, the foundations of Building 2, which preserves a large threshold in situ, were revealed. The fill contained a large number of pieces of tile and sections of clay pithoi, while a small section from the pedimental crowning of a stone funerary stele was also collected.

Small scale test trenches were dug in E. Vrachatis’ property in the flat area to the north of the excavated Doric column. A lot of pottery of the Classical to Hellenistic periods was collected, as well as a section of semi-circular capping with floral relief decoration.

Two wall sections, one EW and the other NS, separated by about 10-15 m, were found on the property of Ev. Leventopoulou to the SW of the previous one. The walls of rectangular blocks of limestone belong to buildings that extend all over the property. The area was rich in Hellenistic pottery and sections of tiles.

In the adjoining property of P. Poulopoulos a section of unfluted column was found among accumulated debris. On the western side of the property, 2 rectangular blocks were found in situ, placed vertically on the ground, while a section of rectangular pedestal (Λ 7732) was found in a modern drystone wall. It had a double ripple on its upper part and a rectangular dowel hole on its top surface. Its lateral surfaces form one raised plate with no trace of an inscription (fig. 2). 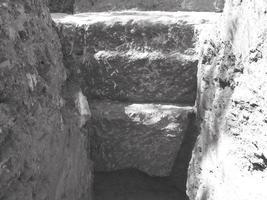 Fig. 1/ Property of G. Poulopoulou; Foundations of the southern inner-wall of Building 1 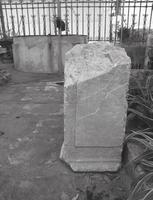