Key-words
Cemetery - Tomb - Figurine - Tools/weapons - Dress and personal ornament - Metal - Bone - Stone
Type of Operation
Excavation - Research excavation
Institution
Ephoreia of the Corinthia; Nemea Center for Classical Archaeology
Toponym
Aidonia, Botsika (JO206/1927)
Linked Record
2009201720182019
Report
Nemea, Aidonia. The Mycenaean cemetery of Aidonia is situated on the olive-growing slopes of the hill which bounds the E side of the community of the same name, offering an exceptional view over the Phliasian plain. The cemetery became known after its professional robbing by organised groups of antiquities thieves in the 1970s. Excavation by the Archaeological Service followed, bringing to light finds which made it possible to link them to the products of the illegal excavation, when these were put on sale outside Greece in 1993. The immediate response of the Greek state led to their repatriation (1996), which were presented, with the finds from excavation, in the National Archaeological Museum and are now in the Archaeological Museum of Nemea.

The EfA Korinthias has initiated a programme of systematic excavation and research in order to study the use of the tombs, the diet and demographic data about the population in connection with production and consumption. The first period of excavation under the direction of the Ephor K. Kissas with the crucial contribution of Assoc. Prof. K. Shelton, Director of the Center for Classical Archaeology of the University of California at Berkeley.

The cemetery consists almost exclusively of chamber tombs, which are completely cut into the natural rock and comprise 3 parts: dromos, stomion and chamber (Fig. 1). The chamber tombs were in use throughout the Mycenaean period (c. 1600/1550-1100 BC). The Aidonia tombs are arranged into 3 groups on the upper, middle and lower parts of the hill.

In 2016, 2 tombs were investigated. In one in the middle group, whose ceiling had collapsed, one primary burial was identified and a significant number of rearranged burials, accompanied by offerings mainly of clay vessels and figurines. The tomb in the lower group had been reused after the Mycenaean period, in the Geometric and Archaic periods and later. Despite its long period of use, an undisturbed pit was preserved within its chamber belonging to the early Mycenaean period (c. 1600/1550-1550/1450 BC), which contained, among others, a burial accompanied by bronze weapons and other prestige items.

In 2017 excavation uncovered the stomion and dromos of a tomb in the middle cemetery, whose chamber had been investigated in 2016 (Fig. 2).

In the lower cemetery excavation in 2017 brought to light 2 new chamber tombs. Although one had been completely robbed in the recent past, controlled excavation proved that it dated to the late Mycenaean period (c. 1350-1200 BC), as well as its limited period of use, while the exceptionally interesting architectural form was fully presented (Fig. 3).

The second tomb was constructed in the early Mycenaean period, was in use until the end of the period and was found under very thick fills with remains of Archaic, late Roman and middle Byzantine times. This very important monument bears witness to the succession of history in the site and its systematic excavation allows the restoration of gaps in the historical study definitively lost through years of illicit excavation activity which affected the other monuments of Aidonia.

The dead were entombed in 3 pits in the chamber floor. One pit was monumental, almost 4m L, covered by large flat stone slabs and containing 3 burials (Fig. 4). In the second pit 2 further burials were found, one accompanied by bronze arrow heads and 5 daggers and knives, 2 of which had handles inlaid with thin gold leaf (Fig. 5). In the fill of the third pit were found fragments of two Palace Style Jars, 2 monumental vessels with plant decoration, which will probably be completely restored. The burials on the floor were less richly furnished with clay vessels and stone buttons.
Author
John BENNET
Bibliographic reference(s)
Ministry of Culture & Sports Press Releases 18/08/16 https://www.culture.gr/el/Information/SitePages/view.aspx?nID=1666 and 24/08/17 https://www.culture.gr/el/Information/SitePages/view.aspx?nID=2010.
Date of creation
2019-08-12 18:48:32
Last modification
2019-08-12 19:26:34
Picture(s) 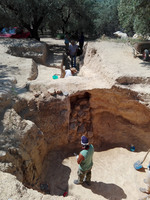 Fig. 2/ Aidonia, middle cemetery: excavation in the stomion and dromos of the chamber tomb.

Fig. 3/ Aidonia, lower cemetery: the dromos, stomion and, in the background, the chamber of the robbed chamber tomb. 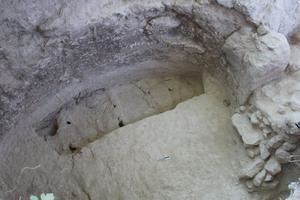 Fig. 4/ Aidonia, lower cemetery: part fo the chamber of the tomb with the monumental pit and its covering stones in situ.

Fig. 5/ Aidonia, lower cemetery: the earlier burial in the second pit in the W of the chamber.