Argos, Parodos Herakleous 39 (O. T. 87, property of S. and E. Zempekou). Christos Piteros (Δ’ΕΠΚΑ) reports on four trenches investigated in the western part of the property. In the upper layers, pottery of the Roman and Hellenistic periods was found and sections of Hellenistic walls, as well as a Geometric infant pithos burial. On a poros Hellenistic foundation stone, large mason’s marks were found: AN. These date to the 2nd c. BC – the horizontal stroke of the A is oblique (slanted). In the NW of the excavation a section of a workshop, a rectangular paved area of unworked stones was found, and on the eastern side a poros, cylindrical stone, most likely from an olive press (Fig. 1). Around the perimeter, the stone has, on its diametre, 2 orthogonal holes (0.09 x 0.12m and 0.085 x 0.115m) pierced from top to bottom (Fig. 2). Inside these holes rectangular wooden beams of small cross-section were fixed to operate the press. At a deeper lever a Geometric cist grave (N-S), disturbed by its many years of use, was found that contained several disarticulated skeletons and a normal adult burial in contracted position. Inside the tomb corroded sections of an iron spit were also found. Deeper, a total of 8 cist graves and 20 pit graves were found that are mainly dated to the late MH, but also to the LH I-LH II periods (Figs. 3-4). The skeletons were adults placed in contracted position and most of the graves had no offerings. Several, however, were furnished with several vessels (Figs. 5-7). At a depth of 3.1 m, a bronze dagger without a handle was found. 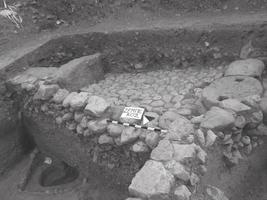 Fig. 1/ Workshop of the olive press 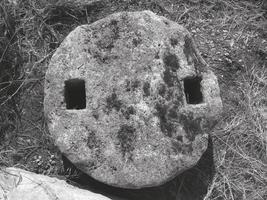 Fig. 2/ Cylindrical stone of the press 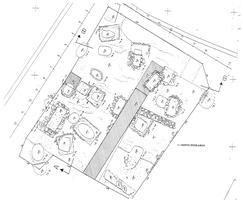 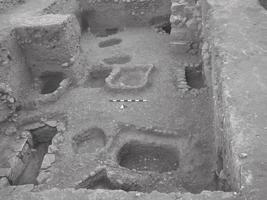 Fig. 4/ View of the graves in the west section of the excavation (taken from the S) 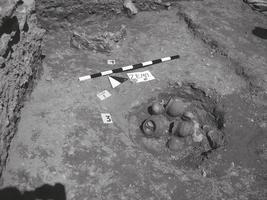 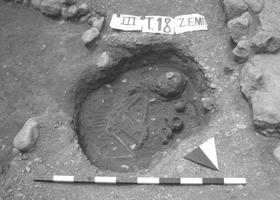 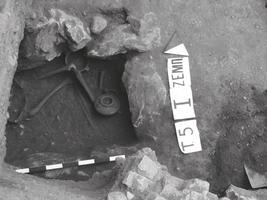