Argos, 10 Angelou Georganta St (O.T. 130, property of Ev. and S. Litsogianni). Christos Piteros (Δ’ΕΠΚΑ) reports on excavations in 4 trenches on the Litsogianni property. The excavation revealed part of the city of Argos with an ancient path in various phases, from the Roman to the Classical-Archaic period, as well as fragmentary foundations of Hellenistic and Roman walls. In deeper layers sparse geometric and proto-geometric pottery was found. The continued use of the space also during the Byzantine period, with deposits and encroachments, resulted in the fragmentary preservation of archaeological fills.

Trench 1 (Fig. 1) yielded an ancient road (pathway), average width 2.5 m. A section of Roman wall (l: 4 m; h: 0.7-1.95 m; S-N direction) made of stones and plaster was revealed on the eastern side of the road. No wall was found on the west, but at a lower level a deposit built of stones, of the Hellenistic era, was discovered (Figs. 1-2). It contained ordinary household waste, sherds of vessels, pieces of tiles, iron nails, shards of glass, small corroded bronze coins, remains from the processing of iron, and animal bones. Immediately to the south and a little higher than the deposit, the northernmost part of a cist grave was (N-S; Figs. 1-2). The southern part extends beyond the area of excavation. An adult skeleton was revealed in supine face-up position, with head to the S, decorated with an open vase and lamp with pointed spout, dating to the late Hellenistic era. The bottom of the grave was covered with white marble.

Trench 2 is to the N of Trench 1. The northern extension of the road (2.2 m wide) was uncovered here. The upper phase dates to the 3rd-4th c. AD, while on the eastern side, a wall with small stones was revealed, as well as remnants of a wall extending 1.5 m to the east into Trench 3. Eight phases of the road were found dating from the Archaic-Classical to the Roman period (Fig. 3). Chariot tracks, 1.4 m apart, were marked on the ancient road. Below the road, were found alternating layers of clay and pavement of small stones and a few sherds, of the protogeometric and geometric periods, the oldest use of the space. The finds from trench 2 analogous to those of trench 1: sherds, household waste, loom weights, small bronze coins, animal bones and iron lumps. On the western side of the road, part of an inscribed limestone base 50 × 26 × 22 cm, with an inscription of the 4th c. BC ‘ΜΕΛΟΔΟΝΑ’ (Fig. 4). Also found was part of a mould of a Megarian skyphos with a cult scene.

Trench 3 lies east of Trench 2. Over a large area disturbances and intrusions of dark soil, ashes, charcoal, refuse from Byzantine and post-Byzantine houses were found. In the south-central part, a small fragmentary section of tufa and limestone was discovered (2 x 1 m) that formed a corner. This is clearly a preserved section of building foundations. At a deeper level sparse pottery of classical, archaic, and geometric times was found from the oldest use of the space, without foundations of buildings.

Trench 4 lies south of Trench 3 and east of Trench 1. The trench was disrupted in the upper layers by the use of the pre-existing house and by intrusions and circular pits of Byzantine and post-Byzantine times. On the eastern side of the road a section of late Roman wall was revealed, made from lime mortar and small to medium sized stones (Fig. 5), while in the deeper SW part of the trench, a small wall foundation was discovered made from tufa and limestone and situated further east and deeper than the late Roman wall. From this, it becomes clear that the initial width of the road was broad (3-3.5 m). From the deeper fill of Trench 4, sparse pottery of classical, archaic, and geometric times was found.

The general picture of the property’s excavation reflects the use of space over time from the Proto-Geometric to late Roman period, but also during Byzantine and post-Byzantine times, with very fragmentary preservation of wall remains in direct connection with an ordinary ancient road that was maintained in good condition, deposits with common pottery and small finds, and household waste. 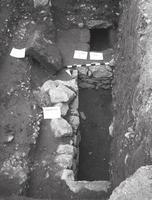 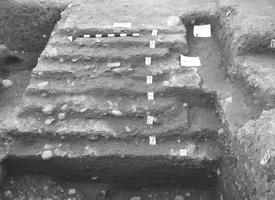 Fig. 3/ Trench 2, phases of the ancient road (taken from the north) 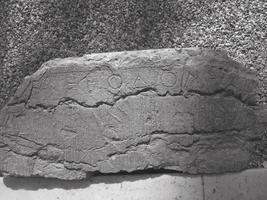 Fig. 4/ Section of the inscribed base Fig. 5/ Trench 4, deposit and section of the road (taken from the north)