Argos, Archaia Vouli Street, property of P. Koros. Georgia Ivou (Δ’ΕΠΚΑ) reports on excavation on a property east of the ancient market of Argos, about 450 m from the theatre. On the plot to the west, remains of an ancient temple (Temple K) have been found. The temple is identified as either Athena Antheia or with the sanctuaries of Athena Salpingos and Demeter Pelasgida, which are mentioned by Pausanias as lying at the eastern border of the agora. On the plot directly to the east, a peristyle building of Roman imperial times was found.

Since buildings on the property were still occupied, investigation was restricted to two periods to the south of the building, where the addition of an extension was foreseen and the site of three pillars (πεδίλων) to the east was investigated (Fig. 1).

In the trench (EW axis) south of the building, sporadic ancient remains were revealed that had been greatly disturbed by modern building activity. In best condition, in the east part of the trench, a wall aligned EW stretches 4.7 m with width of 0.55 m (Tχ 1). It was constructed from small stones with inlaid tile fragments and earth used as a binding agent. Tχ 1 intersects at the eastern corner of the trench with a wall of NS direction (Tχ 2), of which only a section of its western face remains, length 0.55 m, since the rest enters the wall of the trench. Subsequent is the built oost of strong mortar, stones and tiles, length 1.40 m (EW), width 0.70 m and height 1 m.

The situation in the western part of the trench is more fragmented. Only, shells and bones). At a lower level a section of floor was revealed with traces of burning, in which 3 small pit-parts of three small walls (Tχ 3, 4 and 5), with no stratigraphic and morphological context, were preserved. In this part of the trench there was a concentration of waste (2.5 x 3 m), consisting of building and household material (stones, flat and curved tiles, plaster detritus, a large amount of coarse ceramics, shell and bone). At a lower level a section of floor was uncovered showing signs of burning in which had been opened 3 holes in an almost triangular arrangement. Two were of a circular plan, with a diameter of 0.19 m and depth of 0.11 m, while the third had an elliptical plan, length 0.20 m, width 0.15 m and depth 0.08 m.

In 3 small trenches to the east of the residence Roman remains in dense arrangement were brought to light. Walls 6, 7, 8, and 10 (Tχ 6, 7, 8, 10) belong to the same building phase. Wall 9 (Tχ 9) is later and was located at a higher level with a different direction.

Pottery study dates the use of the site from Hellenistic (3rd c. BC) to late Roman times (4th-5th c. AD). Walls Tχ 1 and Tχ 2 are associated with the earliest phase, while the built post and corresponding clayey surface dating probably to the 1st-2nd c. AD. The related walls Tχ 6, 7, 8, 10 to the east also seem to belong to the imperial period. 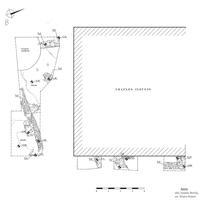