Mesochori Boion, Kastro Vatika. Evangelia P. Eleftheriou (5th EBA) reports on small-scale exploratory trenches at Batika Castle in order to identify/clarify individual elements related to the architecture of the buildings as part of the maintenance study and restoration of the monument. In the inner enclosure, the investigation at the entrance revealed part of a dilapidated building that belonged to the initial building phase of the fortification. In the unidentified, ruined, single-room naïskos that was found inside the inner enclosure, two trial trenches were sunk in the area of the sanctuary and the main church respectively. In the last church, fragmentary surviving flooring was revealed of partially worked slabs of grey limestone. Also, it was discovered that the church had been partly built in the place of an older building of Byzantine times (Fig. 1). From the interior of the church, a few worked porous stones were collected together that probably came from openings. Also, plaster detritus, fragments of hollow tiles, sections of bone, and a few ceramics, sherds from unglazed and glazed vessels (13th-15th c. AD), as well as a segment of a black-glazed vessel of Hellenistic to Roman date were found. Survey work was also carried out, yielding ceramic finds that point to human activity on the hill of the castle during late Hellenistic to Roman times and later in the medieval period, from the late 12th c. AD until the late Middle Ages. 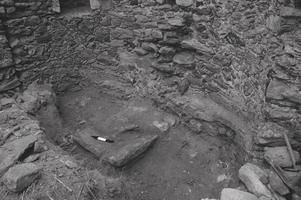 Fig. 1/ Ruined church inside the inner enclosure. Internal view during the investigation. The scale is located on part of an older building