Key-words
Domestic space - Cemetery - Residence - Tomb - Figurine - Lamp - Painting - Dress and personal ornament - Metal - Bone - Tools/weapons - Stone
Type of Operation
Excavation - Research excavation
Institution
ASA
Toponym
Loukia
Linked Record
20122013201420152016201720182019
Report
Koumasa. D. Panagiotopoulos (ASA) reports on excavation in the settlement near the well-known cemetery site (Fig. 1). In Rooms 5 and 6 of the Neopalatial building (Fig. 2) a wild-goat horn, pottery, a stone grinder and the head of a clay anthropomorphic figurine were found (Fig. 3). East of the Neopalatial building, in Trench 4, continuation of an area excavated in 2012 revealed further walls forming a building, as yet incomplete, in which the floor was covered with small stones. Several vessel fragments were found among which was the base of a handleless conical cup.

NW of the Neopalatial building, in Trench 8, where walls of structures on sloping ground had been uncovered in 2015, remains of the upper floor were found, which had fallen when the wooden support of the floor was destroyed (Fig. 4). Apart from the upper-floor wall stones, fragments of coloured plaster (white, red and orange) were found, as well as a pillar-base (dia. 0.51m). In the ground-floor fill and the upper-floor layer were found many handleless conical cups and fragmentary coarse ware vessels.

In Trench 16 (immediately S of Trench 2) building remains were uncovered, as well as a 3-sided prism sealstone of ophite with a hole and linear decoration, fragments of conical cups and a 2-wicked lamp with a low foot (Fig. 5).

In the northernmost part of the excavation (Trench 17), as yet unconnected, part of a building was revealed and Neopalatial ceramics collected together with almost complete brazier. In the same area were found stone tools, Middle Minoan II-III amphorae and, in the deepest level, an almost complete Middle Minoan II handleless hemispherical cup (Fig. 6). 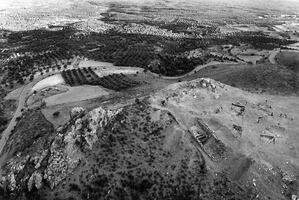 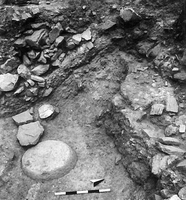 Fig. 4/ Koumasa: pillar-base in Trench 8, with collapsed upper floor in the background (from the E). 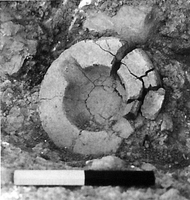 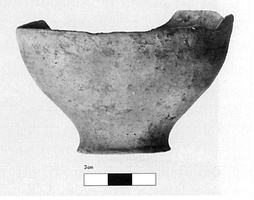 Fig. 7/ Koumasa: funerary deposit: bronze pendant and steatite bead with part of the carbonised string inside its pierced hole.