Key-words
Domestic space - Figurine - Hearth/Kiln/Oven - Cemetery
Type of Operation
Excavation - Research excavation
Institution
Ephorate of Antiquities of Phthiotis & Evrytania, British School at Athens
Toponym
Neo Monastiri
Linked Record
200320082010201120122015201720182019
Report
Koutroulou Magoula. The Koutroulou Archaeology and Archaeological Ethnographic Project completed its tenth season in 2019. The tell site in the region of the village of Vardali, near Neo Monastiri, has an area of about 3.7ha and stands 6.6m above the surrounding plain. The site was a settlement founded in the Middle Neolithic (6000-5800 BC), also used for burials in the Late Bronze Age (15th-14th c. BC) and in the 12th c. AD.

Among this year’s discoveries completion of the uncovering of an impressive Middle Neolithic building situated on the highest point of the settlement stands out. Its stone walls have exterior dimensions of approximately 9.50m x 8.50m, making it one of the largest of this period found in Greece (Figs 1-2). For its walls stones over 1m in height were used, in contrast to other buildings on the site. This large building – probably public and perhaps monumental for the period – had another impressive retaining wall outside it. Another building was built at a higher level in almost the same location. The building’s role and use remain undetermined, but it appears to have been in use for many years and to have undergone a series of repairs and remodellings. In some of these phases, humans and domestic animals shared the building.

A further significant discovery was a group of ceramic kilns on the slope of the tell. One kiln preserves very well its floor and part of its walls which were lined with plaster, as was its roof, it appears (Fig. 3). The kiln was placed on a plastered clay platform, while in the same area were found ceramic vessels that had been incompletely fired. The excavators suggest that these attest to the specialised ceramic knowledge of the site’s inhabitants.

Finally, this year’s excavation demonstrated beyond doubt that the settlement was surrounded by perimeter ditches, large, probably communal works with many social, symbolic and practical uses. In this year’s excavation, part of such a large ditch was uncovered, 4m in depth below the current surface. Its original depth appears to have been about 2m, while its width was at least 4m, much wider in some places (Fig. 4). The Neolithic inhabitants had cut the natural bedrock to make steps within the ditch, not only to make its excavation easier, but also to enable them to remove water and perhaps clay from it. The excavators stress the impressive investment in time and effort in these works, which probably formed a central element in their material and social life. From the same place, excavation produced several clay figurines as well as house models to add to the already impressive – both in quantity and range – collection of over 400 figurines.

The excavation season ended with a presentation, attended by around 200 local inhabitants, entitled “Woman”, which combined archaeological interpretations with contemporary references to gender. The systematic programme of archaeological ethnography also continued this year. 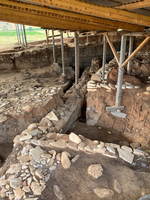 Fig. 1/ Koutroulou Magoula 2019: large building on top of the tell. Fig. 3/ Koutroulou Magoula 2019: detail of ceramic kiln on slope of the tell.