Key-words
Figurine - Metal - Stone - Production/extraction site - Sanctuary - Find Type - Material Type - Site Type
Type of Operation
Excavation - Research excavation
Institution
British School at Athens
Toponym
Keros, Keria, Karos, Kereia
Linked Record
1987200620072008200920102011
Report
Keros. C. Renfrew (BSA/Cambridge) reports on the first season of excavation at Kavos and on the islet of Dhaskalio.
Kavos. Archaeological work began at Kavos (on Keros island, facing the islet of Dhaskalio) in 1963, following extensive looting in the Special Deposit. (Fig. 1) Rescue excavations by C. Doumas revealed EBA structures on Dhaskalio and Kavos, and recovered material from the Special Deposit: subsequently more extensive rescue work was conducted by Ph. Zapheiropoulou. In 1987, an inter-university project (Athens, Ioannina Cambridge) conducted limited excavations in the disturbed areas on Kavos, and initiated a surface survey of the Kavos area. These confirmed the richness of the Special Deposit, and indicated the need for larger scale and more systematic work. The finds clearly established this as one of the most important sites of the Cyc EBA, dating principally to the period of the Keros-Syros culture (ECyc II). The 2006 project aims to establish the nature and functions of the different areas of Dhaskalio and Kavos, and to investigate the nature of the centrality of the site in the Cyclades and beyond.
Following indications from the 1987 survey, work began at the S part of Kavos; here an undisturbed Special Deposit was located, which resembled in many ways that further N in the Central Area. (Fig. 2) The main focus of the 2006 season was therefore the systematic investigation and recording of the Kavos S area (the S 60m of the flattish area which slopes up down to sea before the slope becomes so steep as to form cliffs). (Fig. 3). More than half of the Special Deposit there was excavated to bedrock (which was reached at a d. of no more than 0.4m). Finds included broken pottery, sherds of marble bowls and figurine fragments, clearly systematically discarded after deliberate breakage. (Figs 4,5) The absence of joins between fragments indicated that breakage did not occur at this location, which must be regarded as a place of ritual deposition. The figurines are generally of the ‘folded-arm’ variety, characteristic of the Keros-Syros culture. There are also fragments of the schematic Apeiranthos type. No figurines attributable to the earlier Grotta-Pelos culture were found. Fragments, including heads of the Spedos and Dokathismata varieties were frequent (Fig. 6). Rare forms, such as a fragment of a double figurine, were also represented (Fig. 7). The possibility that the materials recovered had washed down from above was investigated and excluded: it is concluded that they were deliberately deposited in the locations where they were found. In some cases figurine fragments and other materials were found in small discrete assemblages (Fig. 8). It is hypothesised that these materials were brought here in containers, such as baskets, whose contents were then systematically emptied. Wet sieving the Special Deposit produced few beads, no metal objects were recovered, and no human bones or teeth were recovered by any method. No debris was recovered that could be linked to the working of marble. No clear indications of walls or of other structures were found in this area.
The Kavos S area (Fig. 9) ends at the S with a scarp or cliff, where a drop of ca. 3m goes down to a narrow natural platform (ca.3m wide) before falling steeply to the sea. Excavation of small caves or natural recesses in the cliff at the N produced EBA artifacts, and disarticulated or partially articulated human bones and teeth.
Some 30m NE of the Special Deposit area, and considerably up slope, traces of rough walling were observed and excavated. The lines of stones observed were not dressed or squared in the manner observed on Dhaskalio, but were irregular. Further investigation is required to establish their date. Structures in the Central Area (S of the original Special Deposit and N of Kavos S) include the house excavated in 1963 by C. Doumas close to the shore. Built of small, reasonably regular stones with flat faces, generally laid horizontally, this resembles the walls already noted on Dhaskalio, and differs from the indications noted above Further surface indications and walls revealed in looting trenches remain to be investigated: the date of one structure explored by excavation remains to be established.
The study of metallurgical remains (slags) was initiated by M Georgakoulou following surface collections from the Central Area in 1987. In 2006, the area was explored more systematically, and concentrations of slag noted at the N end. Excavation here is planned for 2007-2008.
Dhaskalio. Following the extension of the Kavos GPS grid to Dhaskaio, collection of surface material was undertaken. The materials recovered were exclusively of early bronze age date. They did not comprise the elite materials so frequent in the Special Deposit. The domestic nature of the finds makes clear that this was the principal settlement of the area. Systematic excavation will follow in 2007. Indications of major walls (noted by Doumas) were observed. 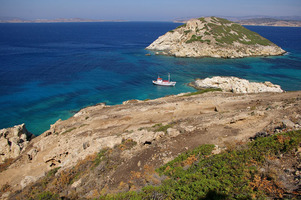 Fig. 1/ Fig.1 Kavos and the islet of Dhaskalio. Fig. 2/ Fig.2 Dhaskalio-Kavos: plan of the main areas of investigation. 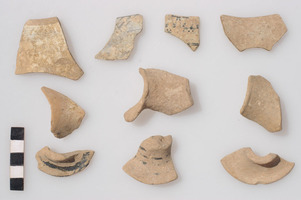 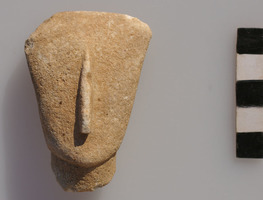 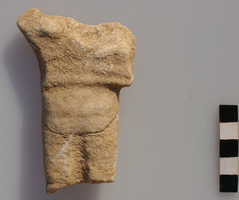 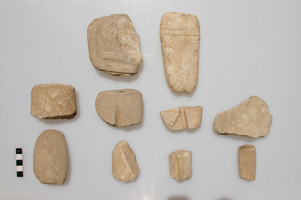