Key-words
Domestic space - Figurine - Hearth/Kiln/Oven - Tools/weapons - Plant remains - Stone
Type of Operation
Excavation - Research excavation
Institution
British School at Athens, Ephorate of Antiquities of Phthiotis & Evrytania
Toponym
Neo Monastiri
Linked Record
200320082010201120122015201720182019
Report
Koutroulou Magoula. Nina Kyparissi-Apostolika (Director Emerita, EPSNE), Vasilis Tsamis (UCL) and Yannis Hamilakis (Brown) report on the fourth season of a second five-year programme of collaborative work on the Middle Neolithic tell site. As in 2017, the major focus was on exploration of the slope and periphery, while excavation also continued on the top of the tell (Fig. 1).
Work there helped clarify questions about the use of space in different temporal moments and to understand better contextual associations. To explore the use of space and social practices at the top of the tell, trenches Z1 and Z2 were reopened (Fig. 2). While excavating the eastern edge of Z1 and the western edge of Z2 a robber’s cut and pit was located and explored, apparently dug by the Neolithic inhabitants of the site to retrieve and reuse the stones of a wall. While re-use of material such as mudbrick had been already suspected, this is the first time that it can be shown that people dug in the rubble of the previous houses to retrieve stone for subsequent building projects. Across the Z2 area the team identified the existence of consecutive floor layers of light reddish yellow colour, packed, with few animal bones and pottery finds, and thick trample surfaces (greater than 0.15m), dark brown in colour, loose, with organic inclusions, rich in pottery and animal bones. Work in trenches Z2/Z1 confirmed the impression from previous seasons that this was an extremely dynamic area in terms of use and building activity.
More striking results were revealed on the slope and at the periphery of the tell. In 2018 work continued west of trench Ξ15, where a new trench (Ξ14) was opened. This area yielded a very large number of finds, most prominently chipped stone, including an obsidian microblade core, a group of large chocolate chert blades, apparently bundled together, perhaps with a perishable organic material, and a rare, probably Late Neolithic, spear point made of honey chert (Fig. 3), most likely from present day Bulgaria. In 2017 the first evidence for a possible pottery kiln area was revealed here, while this year’s investigations suggest the possibility – yet to be confirmed – that there may have been series of kiln installations in various stages of preservation. In the same area an adult inhumation burial was uncovered (Fig. 4), which, although previous experience suggested probably dates to the Medieval period, as with the burial found on top of the mound in 2011, AMS dating results returned in 2020 on a sample from a tibia gave a determination of 6371-6070 CalBC.
The most striking result, however, was to be found at the edge of the settlement in Trench X16, whose primary purpose this season was to identify and record the edges of the ditch that had appeared in a magnetometer survey in 2011-2012. In 2018, it proved possible successfully to identify this ditch and to locate its west and east edges (Fig. 5). It was probably curvilinear with a northeast-southwest orientation, surrounding the tell. It was approximately 6m wide and an extrapolation of its gradient suggests that it was deeper than 3m. The ditch fill contained abundant pottery and other finds, including many clay sling pellets (Fig. 6). Eroded pottery and figurine fragments suggest exposure and deposition over time, indicating a slowly accumulated fill. Excavation of this fill will be completed in 2019. The ditch appears not to have been maintained in its later phases, but was covered by silt and alluvial soil from the surrounding flood plain. The importance of this find for spatial and social practices in the Neolithic and for communal organisation is substantial.
In addition to excavation work, sampling, post-ex analysis and publication continued, as did programmes in ethnography, education, community archaeology, and theatre/archaeology.
Author
John BENNET
Bibliographic reference(s)
Unpublished field report, British School at Athens
Date of creation
2019-03-17 10:48:19
Last modification
2020-12-22 16:16:57
Picture(s) 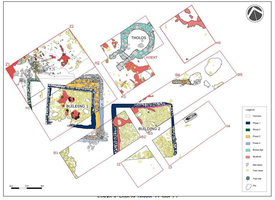 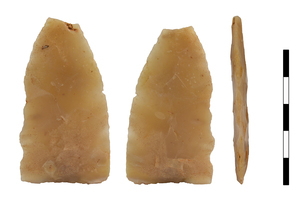 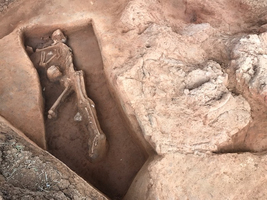 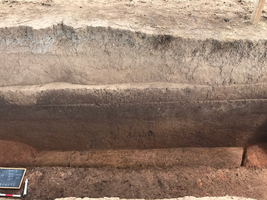 Fig. 5/ Koutroulou Magoula 2018: Edges of the ditch located in Trench X16 (red sediment to the extreme right and left). 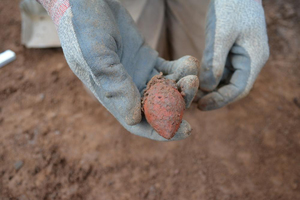 Fig. 6/ Koutroulou Magoula 2018: A clay sling pellet, one of several found in the fill of the ditch in Trench X16.