Kentri, Rousses. An unlooted chamber tomb was excavated by the Ephorate of Antiquities of Lasithi in an olive grove at the site of Rousses, c. 800m NE of the village of Kentri (Fig. 1). Its existence was revealed by a hole 1.20m in diameter and 2.5m deep (Fig. 2). The chamber tomb was cut into the local soft, marly limestone and was approached by a vertical cutting, while the entrance was sealed with a dry-stone wall.

The interior of the tomb was divided into 3 cut niches. In the southernmost was found a complete box-larnax with its cover in place, in which was the very well preserved skeleton of an adult individual in a highly contracted position (Figs 3-4). In front of the larnax were found 14 stirrup-jars, an amphoroid krater with built-in base and a cup.

In the northernmost niche was found a complete, but broken bath-tub larnax, without lid, in which there was the decayed skeleton of an adult individual. In front of the larnax were found 6 small stirrup-jars and 2 small jugs. All the vessels were complete, of good quality and excellent preservation.

Based on the ceramic typology, according to the initial estimations, the tomb can be dated to the Late Minoan IIIA2-B period, c. 1400-1200 BC.

Location of the tomb was due to a chance occurrence and the Ephorate of Antiquities of Lasithi was informed by a local inhabitant. Near the excavation was an indication of another tomb and investigation was continued without result.

A team of archaeology students from the National and Kapodistrian University of Athens took part in the excavation. 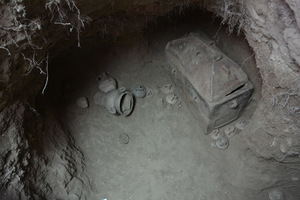 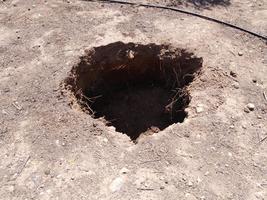 Fig. 2/ Kentri, Rousses: the hole in the chamber roof prior to excavation. 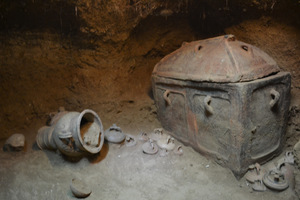 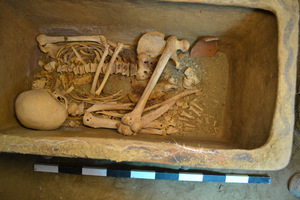