Key-words
Sanctuary - Public area - Religious building - Stone - Metal - Architectural revetments - Temple - Public building - Site Type - Building Type - Material Type - Find Type
Type of Operation
Study
Institution
École française d’Athènes
Toponym
Delos, Délos, Dilos
Linked Record
200520062007200820102012201520162016 (1)201720182018 (1)
Report
Aphrodision of Stesileos. C. Durvye (EfA) reports on a post-excavation season focused on the study of ceramics and analysis of glass materials found in abundance (and probably redeposited) in oikos 2 and under the ramp beside it. An initial assessment of the excavations of 2005−2006 leads to the restoration of 4 occupation phases in the area E of the sanctuary dating between Delian independence and the construction of an aqueduct in the ruins of the oikoi, after the abandonment of the area during the 1st Ct BC (Fig. 1). The first phase, dating from independence, is seen sporadically in oikoi 3 and 4; a 2nd phase, during Athenian dominance, consists of a general filling of the area for the construction of oikoi 3, 4 and 5; the 3rd phase, at the end of the Athenian period, is characterized by a levelling of the area which was furrowed by runoff to the W, and the construction between the oikoi and the temple of oikos 2 and a ramp along its length. Finally, after the abandonment of the area during the 1st Ct BC, the stanchion of an aqueduct was built in the ruins of the oikoi. 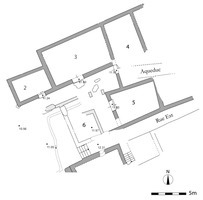