Koumasa. D. Panagiotopoulos (ASA) reports on continuing excavation of the Minoan cemetery (Figs 1-2). On the first day the head of a limestone Cycladicising figurine of Koumasa type was found (Fig. 3); to date the excavation had only produced 4 fragments of similar figurines, but without heads.

During cleaning of tholos B part of a bronze dagger was found among bone. Fill to the NW of the tomb produced beads, fragments of stone vessels and obsidian blades, as well as a large number of pottery sherds. The ceramics date to the Pre- and Proto-palatial periods. The most significant find was another head of a Cycladic figurine of Dokathismata type (Fig. 4), bearing a few indications of colour. Xanthoudidis had found an intact Cycladic figurine, but of Spedos type.

In a pit containing secondary burials 57 beads of a necklace were found among human and animal bones (Fig. 5). The beads were cylindrical with fluted decoration and disc-shaped. Three small stone amulets were also found.

In the larger cemetery, outside the tholos tombs, much pottery of the EM IIA period was found (Fig. 6) offering a clear means to define its period of use. 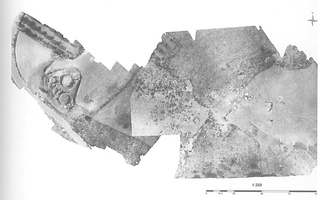 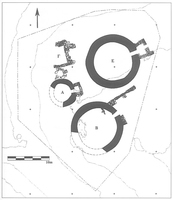 Fig. 4/ Koumasa: head of a Cycladic figurine of Dokathismata type. 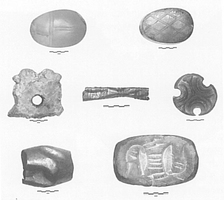 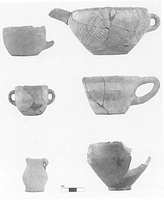