Messene. P. Themelis (ASA) reports on continued work at the site of ancient Messene. Excavation of the architectural complex N of the Sanctuary of Isis of the 4th and 5th c. AD was completed; it comprises 3 cisterns and rooms around them with stone benches around the interior faces of their walls. The excavator believes the complex was associated with initiatory rites into the worship of Isis and speculates that the proximity of the Temple of Isis to the early Christian basilica is not accidental. In the S section of the Santuary of Isis large, vaulted rooms were uncovered linked – both in construction and function, according to the excavator – with the large underground stoa that surrounds the sanctuary.

The function of the 2-roomed building of Hellenistic date in the agora was clarified: the N room is still considered a dining room (deipnisterion), while the adjoining S room is now thought to be a prytaneion as a result of further excavation which included the discovery of bases for stelai with decrees. At a later date the room was extended to the S for new purposes, its extension using as building material inscribed statue pedestals that were originally placed in the Doric porch of the complex. One bore the following inscription of the priests of Zeus Ithomatas in honour of Saithidas Caelianus who is known from other inscriptions (Fig. 1):

A second pedestal in secondary use bore an honorary inscription to the emperor Septimius Severus (193-211 AD) (Fig. 2):

In addition extensive restoration works were carried out in the palaestra, the stoa of the meat market and the supporting-wall of the so-called north terrace. 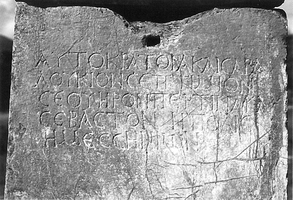