Key-words
Well - Tomb - Figurine - Hearth/Kiln/Oven - Tools/weapons - Glass - Hydraulic installation - Cemetery
Type of Operation
Excavation - Rescue excavation
Institution
Δ' ΕΠΚΑ
Toponym
Argos
Linked Record
2009
Report
Argos, Tripoleos Street (Property of N. Anastasiou). Christos Piteros (Δ’ΕΠΚΑ) reports on the discovery of a Hellenistic and Roman cemetery (Fig. 1). In the eastern part of the property was found the built entrance of a large previously looted burial structure made of poros blocks (0.90x0.50x0.30 m.) (Fig. 2). The building was preserved to the height of four blocks and rested on a pebble floor. The staircase consisted of four poros steps lined with plaster and was between 1.10-1.15 m. in width. The floor was made of a thin layer of sand and mortar. Around the building were Hellenistic and Roman tile covered graves as well as pit burials, a poros shaft grave and one in a pithos. The graves contained unguentaria and various glass vases. In the south-eastern corner of the structure was part of a rectangular cremation kiln, while further to the south was part of the outer wall, made of limestone and poros blocks. In the same area was a circular well made of poros which contained pottery from the 4th and 3rd centuries B.C., as well as the remains of a small clay shield depicting a gorgoneion (Fig. 4).
In the western part of the excavated area were a number of tile covered graves (16, 18-23), a partly preserved cist grave and part of a wall which does not appear to be associated with the graves. The graves were dated to the Hellenistic and Roman periods. At a deeper level a pit burial and shaft grave were excavated, both dated to Late Mycenaean IIIC.
Additional finds included Hellenistic pottery, Early Classical anthropomorphic figurines and a Mycenaean zoomorphic figurine (Fig. 3).
Author
John BENNET
Bibliographic reference(s)
ADelt 64 (2009) Chr., 268-270.
Date of creation
2017-11-08 00:00:00
Last modification
2020-03-30 12:28:31
Picture(s) 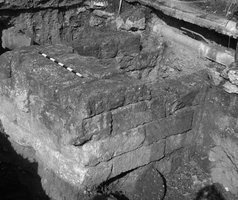 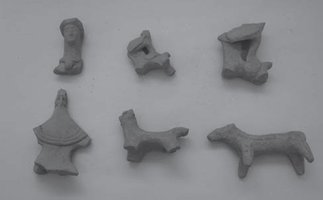