Key-words
Pipe/drain - Cistern - Lamp - Hydraulic installation - Production/extraction site
Type of Operation
Excavation - Rescue excavation
Institution
Δ' ΕΠΚΑ
Toponym
Argos
Linked Record
2008
Report
Argos, Karamoutza Street (Property of A. and P. NTASOU and Ev. Georgantopoulou). Eleni Sarri (Δ' ΕΠΚΑ) reports on further excavation of buildings from Late antiquity, including a number of different construction phases (Fig. 1).
The first building phase (4th to 5th centuries AD) included a wall (3) of 14.10 m. in length and 1.14-1.17 m. in height, aligned on a N-S axis. It was built using the opus testaceum system and had a foundation of stone blocks. It was plastered and there were signs of repairs. Around the wall was a destruction layer consisting of bricks from its upper part. The northern side had been destroyed by the construction of a wine press (linos) and its collecting tank (ypolinio), which were aligned on an E-W axis (Figs 3). The press was square (4.50 m.) and preserved to a height of 0.60 m. The floor was paved with clay slabs and sloped down towards the centre where there was a small depression. The walls were internally lined with hydraulic plaster. The grape must was led to the ypolinio (1.70×0.95×0.96 m.) through a clay pipe of 0.12 m. in diameter. Its upper part was of a step-like construction to avoid flooding. The floor was paved with slabs and had a depression at one edge which was connected to the pipe. Two steps allowed access to the interior of the ypolinio. The walls of both the linos and ypolinio were built in courses using a mixture of styles, as well as including some spolia. The walls and finds, including lamps of the 6th c. AD, suggest continuous use during Late Antiquity.
In the western part of the area was a building dated to the third construction phase, consisting of three rooms built using the mixed opus incertum style. The building postdates the construction of the wine press and other buildings.
Author
John BENNET
Bibliographic reference(s)
ADelt 63 (2008) Chr., 261-263.
Date of creation
2017-10-31 00:00:00
Last modification
2020-04-02 16:19:22
Picture(s) 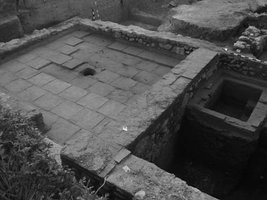 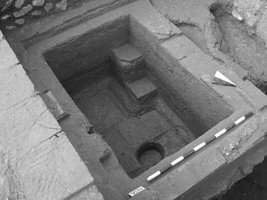