Key-words
Public building - Well - Tomb - Inscription - Numismatics - Tools/weapons - Dress and personal ornament - Metal - Bone - Stone - Glass - Hydraulic installation - Commercial area - Public area - Cemetery - Production/extraction site - Road system/waterway
Type of Operation
Excavation - Rescue excavation
Institution
Δ' ΕΠΚΑ
Toponym
Argos
Linked Record
2008
Report
Argos, Karamoutza Street (O.T. 186, Property of S. Gitziri). Christos Piteros (Δ’ ΕΠΚΑ) reports on the excavation of a road, foundations, burials and other features (Fig. 1). In the central and southern part of the property was a road of 6.60-6.70 m. in width, running in a SE-NW direction (Fig. 2). On both sides were building foundations, workshops, wells and burials dated from the Protogeometric to Early Roman periods. Along the northern side of the road was a large rubble wall of 0.70 m. in width, attached to which were burial monuments, foundations of Hellenistic buildings and a workshop.
In the north-western part of the road was burial monument A, dated to the 2nd c. BC, in which there were multiple interments (Fig. 3). It was rectangular in shape and built with poros stones preserved to the height of two courses. A partly preserved poros semi-column was probably part of the original superstructure. Although looted, the interior of the tomb produced pottery including unguentaria, Megarian skyphoi and plates, amongst other items. The monument contained two disturbed tile covered graves (3 and 4) and another (6) which contained the remains of a woman. To the east were another two adult tile covered graves (2 and 7), while further east was another burial monument in which there were two adult cist graves (5 and 10) (Fig. 5). Grave 10 was dated to the late Hellenistic/Early Roman period. Further to the east were another two tile covered graves dated to the Hellenistic/Late Hellenistic. A fragment of a Laconian tile was found with the stamped inscription ΕΠΙΚΑΛΛΕΟC (Fig. 6), along with a Hellenistic pit burial with a few grave goods and goods from other destroyed graves (Fig. 4).
In addition to the burials were parts of the foundations of three or four buildings as well five wells of between 0.60 m. and 1.10 m. in diameter (Fig. 7). Additional finds included loom-weights and spindle-whorls, pottery of the Archaic, Classical and Hellenistic/Early Roman periods, coins and iron blocks. A residential and commercial character has been assigned to the area. Also found was a clay mould of rectangular shape depicting two opposing theatrical figures (Fig. 8).
In the north-eastern part of the excavation was a large pointed burial pithos (1.65x1.15 m.) dated to the early Geometric period (pithos 1). It contained an adult burial in a contracted position and a few grave goods (Figs. 9, 10). Further to the south was an Early Geometric female burial in a piriform pithos (1.05x0.75 m. in diameter) with plastic decoration (pithos 12), in which pottery and jewellery were found (Figs. 11, 12). Close to pithos 12 was a disturbed burial (9), probably belonging to a child. It was richly furnished with pottery of the Early Geometric period including amphora, pyxis, phiale, oenochoe and a feeding bottle, along with jewellery including a hair ring and glass bead (Figs. 13, 14).
The ancient road consisted of four pebble-paved surfaces in which were preserved chariot grooves. On the basis of the pottery these were attributed to the Classical/Hellenistic periods. In its final form the road was widened from 4.50 m. to between 6.60-6.70 m. and became an avenue. A workshop was identified on its northern side, along with another building, wells, round pits and six graves on the southern side. There were also six tile covered graves, three cist graves and one pithos burial, all richly furnished, along with a rectangular structure used for cremations.
Author
John BENNET
Bibliographic reference(s)
ADelt 63 (2008) Chr., 251-256.
Date of creation
2017-10-31 00:00:00
Last modification
2020-04-02 16:11:28
Picture(s) 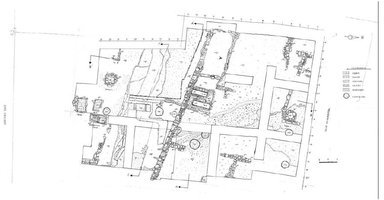 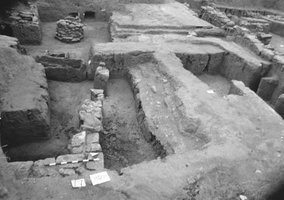 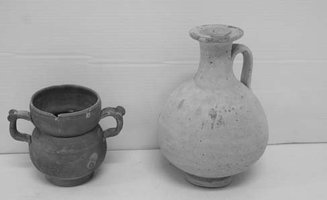 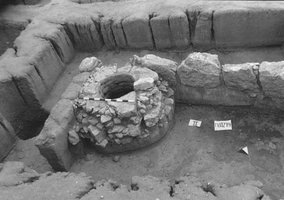 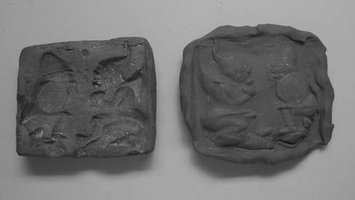 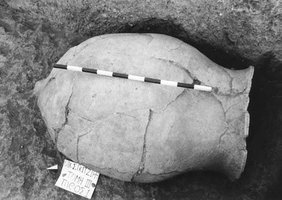 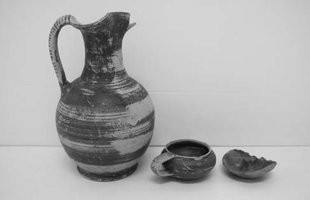 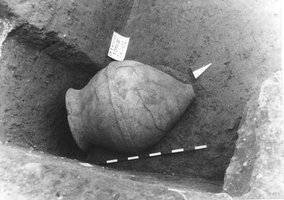