Key-words
Tomb - Tools/weapons - Dress and personal ornament - Metal - Bone - Stone - Glass - Cemetery
Type of Operation
Excavation - Rescue excavation
Institution
Δ' ΕΠΚΑ
Toponym
Argos
Linked Record
2007
Report
Argos, Tripoleos Street (Ο.Τ. 478, Property of D. Michalopoulou). Christos Piteros (Δ' ΕΠΚΑ) reports on the completion of excavations carried out within the property since 2004. Ten trenches aligned on an E-W axis were investigated during 2007 (Fig. 1). Roman pottery was present on the surface while in the eastern part of the property were two square burial constructions (A and B) of the same chronology (Fig. 2). Burial A was aligned on an E-W axis and consisted of a main chamber and antechamber. It was built using rubble and mortar (7.20×5.0 m.), with walls of 0.80 m. thick. Burial B was located to the south of A, with visible dimensions of 2.80 m. by 4.0 m. It was built using rubble and mud and continued into an adjacent property.
Deeper sediments sloping down towards the west were attributed to the Hellenistic. Building remains were absent but they did include rubble, ash, Laconian tiles, coarse pottery, coins, glass vases, loom-weights, iron nails and other metal objects as well as animal bones. In the north-western part of the property were gravel deposits and greyish soil which also sloped down towards the west. In this area and at a deeper level were Late Helladic ΙΙΙC inurned burials within the gravel (Figs. 3, 4). The vessels had been placed upright within circular pits and were covered with small stones (limestone) and soil. Also present were small cist graves. Both types of graves formed part of a burial mound excavated in the adjacent property. In the same area was a burial pithos of the Middle Helladic along with graves of the Hellenistic and Roman periods. The pithos was 1.36 m. in length, laid sideways and with the stomio sealed with a pithos fragment. It contained a small biconical pot, while a single handled cup found outside the pithos may be associated with another destroyed pithos burial (Fig. 6).
In trench 4 was an infant cist burial (9) and one in a pit (6). In the latter were two interments and a few Mycenaean pottery sherds, along with an associated ash deposit containing burnt bones and a biconical spindle-whorl. To the south of grave 6 was an ash urn in the shape of an amphora with a cup used as lid. In trench III, was an ash urn within a pit with burnt bones, along with a cist burial (11) which was devoid of grave goods, along with a pit with a covering slab containing an infant burial (12). In trench 5/3 was an infant pit burial (14) with covering slabs, three pit burials (15, 19 and 20) with covering slabs and a cist grave (18). In trench 6 was an infant cist grave (16) and a circular pit (16a) with a possible cremation. Also found in trench 6 was a blue lazurite bead and a ‘button’ of steatite, while between trenches 5 and 6 was cist grave (24) (Fig7) dated to the post-Mycenaean (Fig 5). In trench 7 were two Late Helladic IIIC cist graves (21 and 23) and a Roman burial (13) with a few grave goods. In trench 8 was a Late Helladic IIIC pit burial (8), possibly of an infant, along with a richly furnished tile covered grave of a female (29), dated to the Roman period. Amongst the grave goods was a pyxis with metal fittings (0.4x0.4 m.), probably containing clothes for the deceased (Figs. 8-10, 12). In trench 10 were a number of tile covered graves (22, 26, 27 and 30) (Fig. 11) with the latter richly furnished, along with cist burials (25 and 28) and one in a pit (31) (Fig 11).
Author
John BENNET
Bibliographic reference(s)
ADelt 62(2007) Chr., 274-278.
Date of creation
2017-10-31 00:00:00
Last modification
2020-04-03 10:52:42
Picture(s) 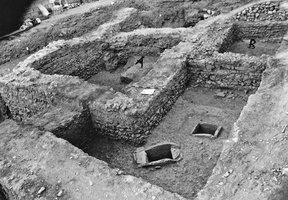 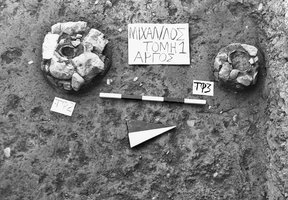 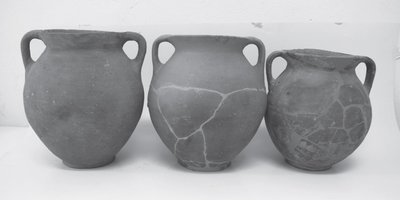 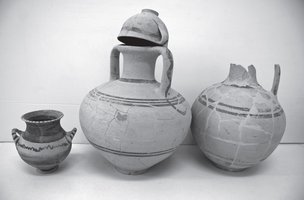 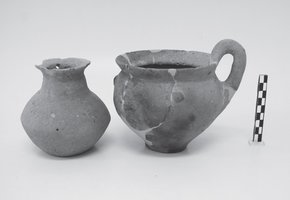 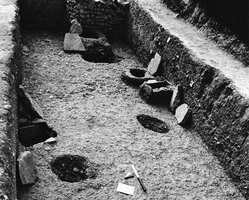 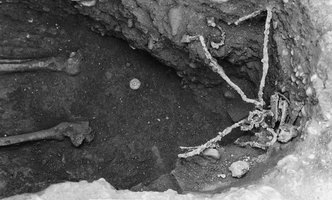