General Information
Record ID
6225
Activity Date
2008
Chronologies
Key-words
Tomb - Painting
Type of Operation
Excavation - Rescue excavation
Institution
26th EBA
Toponym
DROSIA
Linked Record
20082008 (1)
Report
Drosia, Palaia Loutra. Evgenia Chalkia (26th ΕΒΑ) reports on further excavation of building remains including an arched wall (Τχ 1) that were previously investigated in 2006 and 2007 (Fig. 1). The current excavations were concentrated in the southwest area of the wall and resulted in the location of its southwestern extent and confirmation of the presence of an arch, 1.05 m. in width. Part of the southern wall of the building was also excavated (Τχ 3). It ranged in thickness from 0.50-0.55 m. and in contact with its outer surface was a grave construction of irregular rectangular shape. Its northern side consisted of alternating stones and bricks, while its southern side was made from bricks only. The eastern and western sides were not preserved while its floor consisted of roof tiles and mortar. The grave contained multiple burials and a few goods although it had been looted.
In contact with the northern edge of wall 3 and about 1 m. from the southern end of the arch, was a built pillar (0.70x0.50 m.). On this were preserved fragments of a painted surface, depicting the legs and the bottom of a dress of a standing figure (Fig. 2). Additional finds included unpainted and glazed pottery.
Author
John BENNET
Bibliographic reference(s)
ADelt 63 (2008) Chr., 417-418.
Date of creation
2017-10-30 00:00:00
Last modification
2019-08-13 10:30:24
Picture(s) 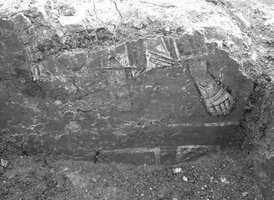