Key-words
Tomb - Architectural revetments - Metal - Bone - Glass - Cemetery
Type of Operation
Excavation - Rescue excavation
Institution
5th EBA
Toponym
Sparte, Sparta, Lakedaimon, Lacedaemon
Linked Record
20072008
Report
Sparta, Platanista Street (O.T. 127, property of N. Panoutsakou). Maria Florou (5th ΕΒΑ)reports on further excavations in an area in which there were three burials (VII, VIII, IX) and parts of walls, all on a NW-SE orientation (Fig. 1).
Burial VII was covered by a stone slab and its walls were made of rubble and mud. The base of a column was incorporated into its north-eastern side and a clay marker slab was placed vertically at the head of the grave. The floor was made of tile fragments and the grave contained two poorly preserved inhumations and no grave goods. Burial VIII was also covered by stone slabs, with its walls made of rubble, tiles and mud. It had no floor and contained one inhumation and no grave goods. Burial IX was a cist grave made of concave tiles in which there was a single poorly preserved skeleton with no grave goods.
The walls were all made of rubble, tiles and mortar. A built construction of rubble and spolia was also excavated (0.70×0.80 m.). Additional finds included Roman, post Roman and Byzantine pottery, metal objects (iron nails, copper), along with marble architectural remains and fragments of glass pots.
Author
John BENNET
Bibliographic reference(s)
ADelt 63 (2008) Chr., 361-362
ΑDelt 61 (2006) Chr., 348-349
ADelt 62 (2008) Chr., 323-326.
Date of creation
2017-10-30 00:00:00
Last modification
2019-08-13 10:19:45
Picture(s) 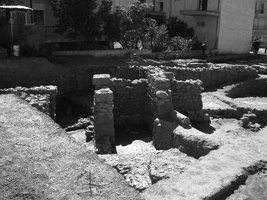